Mapping the Genres of Healthcare Information Work: An Interdisciplinary Study of the Interactions Between Oral, Paper, and Electronic Forms of Communication 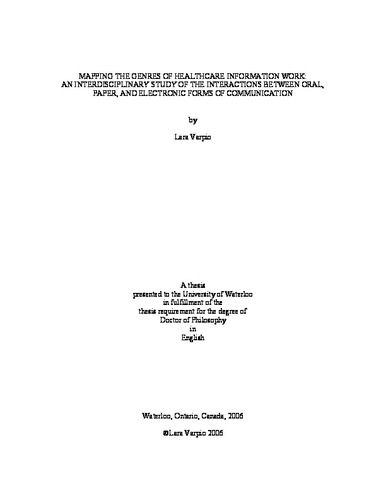 Electronic Patient Records (EPRs) are becoming standard tools in healthcare, lauded for improving patient access and outcomes. However, the healthcare professionals who work with, around, and despite these technologies in their daily practices often regard EPRs as troublesome. In order to investigate how EPRs can prompt such opposing opinions, this project examines the EPR as a collection of communication genres set in complex contexts. In this project, I investigate an EPR as it was used on the Nephrology ward at a large, Canadian, urban, paediatric teaching hospital. In this setting, this study investigates EPR-use in relation to the following aspects of context: (a) the visual rhetoric of the EPR's user-interface design; (b) the varied social contexts in which the EPR was used, including a diversity of professional collaborators who had varying levels of professional experience; (c) the span of social actions involved in EPR use; and (d) the other genres used in coordination with the EPR. <br /><br /> This qualitative study was conducted in two simultaneous stages, over the course of 8 months. Stage one consisted of a visual rhetorical analysis of a set of genres (including the EPR) employed by participants during a specific work activity. Stage two involved an elaborated, qualitative case study consisting of non-participant observations and semi-structured interviews. Stage two used a constructivist grounded theory methodology. A combination of theoretical perspectives -- Visual Rhetoric, Rhetorical Genre Studies, Activity Theory, and Actor-Network Theory -- supported the analysis of study data. This research reveals that participants routinely transformed EPR-based information into paper documents when the EPR's visual designs did not support the professional goals and activities of the participants. <br /><br /> Results indicate that healthcare professionals work around EPR-based patient information when that genre's visual organization is incompatible with professional activities. This study suggests that visual rhetorical analysis, complemented with observation and interview data, can provide useful insights into a genre's social actions. This research also examines the effects of such EPR-to-paper genre transformations. Although at one level of analysis, the EPR-to-paper-genre transformation may be considered inefficient for participants and so should be automated, at another level of analysis, the same transformation activity can be seen as beneficially supporting the detailed reviewing of patient information by healthcare professionals. <br /><br /> To account for this function in the transformation dysfunction, my research suggests that many contextual factors need to be considered during data analysis in order to construct a sufficiently nuanced understanding of a genre's social actions. To accomplish such an analysis, I develop a five-step approach to data analysis called 'context mapping. ' Context mapping examines genres in relation to the varied social contexts in which they are used, the span of social actions in which they are involved, and a range of genres with which they are coordinated. To conduct this analysis, context mapping relies heavily on theories of "genre ecologies" (Spinuzzi, 2003a, 2003b; Spinuzzi, Hart-Davidson & Zachry, 2004; Spinuzzi & Zachry, 2000) and "Knotworking" (Engestrom, Engestrom & Vahaaho, 1999). Context mapping's first three steps compile study data into results that accommodate a wide range of contextual analysis considerations. These three steps involve the use of a composite scenario of observation data, genre ecologies and the description of a starting point for analysis. The final two steps of this approach analyse results using the theory of Knotworking and investigate some of the implications of the patterns of genre use on the ward. <br /><br /> Through context mapping analysis, this study demonstrates that EPR-based innovations created by a study participant could result in the generation of other improvisations, in a range of genres, by the original participant and/or by other collaborators. These genre modifications had ramifications across multiple social contexts and involved a wide range of genres and associated social actions. Context mapping analysis demonstrates how the effects of participant-made EPR-based variations can be considered as having both beneficial and detrimental effects in the research site depending on the social perspective adopted. Contributions from this work are directed towards the fields of Rhetorical Genre Studies, Activity Theory research, and Health Informatics research, as well as to the research site itself. This study demonstrates that context mapping can support text-in-context style research in complex settings as a means for evaluating the effects of genre uses.

Lara Varpio (2006). Mapping the Genres of Healthcare Information Work: An Interdisciplinary Study of the Interactions Between Oral, Paper, and Electronic Forms of Communication. UWSpace. http://hdl.handle.net/10012/2818