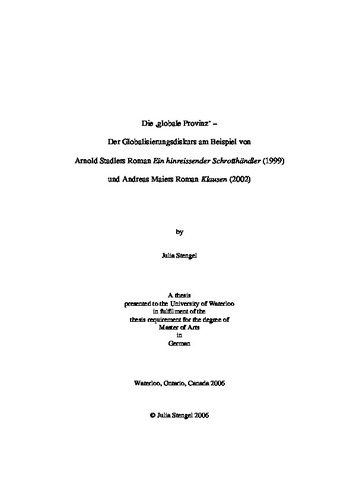 This thesis demonstrates how two literary works ? Arnold Stadler's <em>Ein hinreissender Schrotthändler</em> (1999) and Andreas Maier's <em>Klausen</em> (2002) ? can be read as part of the globalization discourse. As a theoretical basis for the textual analysis the thesis first develops an understanding of the concept of globalization which forms a background against which the two literary works can be read. By embedding literature into the sociological theories of globalization it is possible to examine to what extent the two novels reflect and/or generate particular aspects of globalization. <br /><br /> Both texts are set largely in provincial towns, and the regions themselves play commanding roles in the stories being told. This focus on the provincial takes on an ironic appearance in the era of globalization where one would assume that localities have lost meaning. It is therefore useful to look at theories that broach the issue of the tense relation between globality and locality. Since no universally accepted definition of globalization exists, it is necessary to establish the crucial aspects of the phenomenon to be applied in the analysis of the novels by examining the work of various theorists on the topic. <br /><br /> The prominent model of 'glocalization,' originated by the sociologist Roland Robertson to refer to 'global localization,' offers useful categories for the analysis of the provincial in the era of globalization. In this model the simultaneity of global and local processes is assumed and with it the alleged antagonism of the 'global' and the 'local' is overcome. Claiming those dynamics Robertson's model can serve as a confirmation of the arguments put forward in this thesis which looks at literature about the 'local' through the prism of globalization. Other theories relating to explicit local dynamics are presented to round out the model of 'glocalization. ' In addition, the thesis takes into account normative ideas regarding the province in the global era. <br /><br /> The textual analysis that follows the delineation of the model of 'glocalization' demonstrates how the novels illustrate the global and local processes postulated by the model. The investigation also explains how the literary texts themselves evaluate the provinces portrayed. The results of the examination show that selected aspects of the globalization discourse have found their way into two contemporary German-language novels and therefore into German literary discourse. Even though the two novels deal with different ideas from the discourse, and even reject to a certain extent some of these concepts, they each reveal a particular literary manner of echoing the processes of globalization. Finally, the thesis demonstrates that the globalization discourse is of use for the interpretation of literary texts.