Age-related changes in the neural and cognitive processes relating to memory retrieval under conditions of full and divided attention. 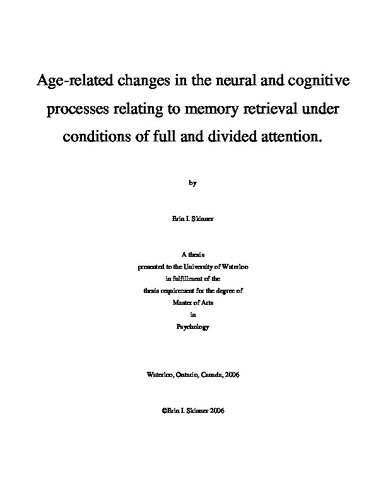 We examined the neural and cognitive processes engaged during auditory verbal recognition performance under full attention (FA) and divided attention (DA) conditions in younger and older adults. Recognition was disrupted by a word (DA-word), but not digit-based (DA-digit) distracting task, performed concurrently with retrieval. In Study 1, a multivariate functional magnetic resonance imaging analysis technique, Partial Least Squares (PLS) was used to identify distributed patterns of brain activity most related to the different conditions and behaviours. We found that similar retrieval networks were recruited during the FA and DA-digit, but not DA-word, condition in both age groups, mirroring behavioural performance. There was, however, an age-related change in the brain regions that predicted successful memory performance. In addition, we found that a neural network relating to hippocampal activity predicted memory success during the FA and DA-digit, but not DA-word, condition in younger, but not older, adults. In study 2, we used a Remember-Know paradigm to examine how manipulations of DA affect recollective and familiarity-based retrieval processes. Younger and older adults showed an increase in false Remember responses during both DA conditions and decreased accuracy in Know responses only during the word-based DA condition. In addition, aging was associated with decreased accuracy in Remember, but not Know, responses, in both DA conditions. In a follow-up experiment, we showed that these results cannot be accounted for by differences in difficulty level of the chosen distracting tasks. Results suggest that recollective processes rely on attentional resources during retrieval. Together these studies show that declines in available attentional resources, common with advancing age, affect both the neural networks used during retrieval, and the qualitative nature of the memories that are retrieved. Results also suggest that familiarity processes rely on the reactivation of content-specific representations, mediated by a neural network relating to hippocampal activity in younger, but not older, adults.

Erin I. Skinner (2006). Age-related changes in the neural and cognitive processes relating to memory retrieval under conditions of full and divided attention.. UWSpace. http://hdl.handle.net/10012/2813