A Stimulus-Response Account of Stroop and Reverse Stroop Effects 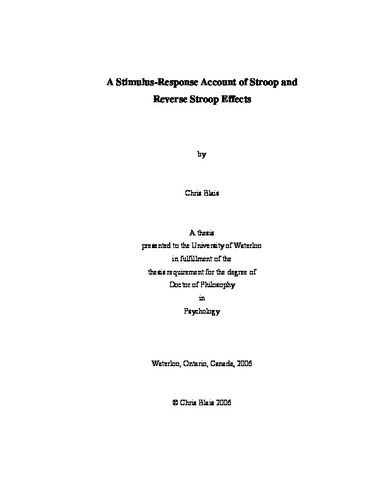 This thesis concerns selective attention in the context of the Stroop task (identify the colour) and Reverse Stroop task (identify the word). When a person is asked to select and identify one dimension of a bidimensional stimulus (e. g. , the word RED printed in green) the typical finding is that the word influences colour identification (i. e. , the Stroop effect) but the colour does not influence word identification (i. e. , no Reverse Stroop effect). A major account of performance in these tasks posits that one dimension interferes with the other only when a translation occurs (e. g. , Roelofs, <i>Psychological Review, 2003</i>; Sugg & McDonald, <i>Journal of Experimental Psychology: Human Perception & Performance, 1994</i>; Virzi & Egeth, <i>Memory & Cognition, 1985</i>). This translation assumption is implicit in virtually all work in the field. The first part of this thesis completely undermines the translation assumption. In a series of four experiments (two unique paradigms), I demonstrate that interference from the colour in a Reverse Stroop task occurs in the absence of a translation. The second part of this thesis contains two additional experiments designed to discriminate between translation effects and response conflict effects. The results of these experiments confirm that a translation was not required because no stimulus conflict effect, the most likely locus of a translation effect, was observed. However, response conflict effects were observed. The third part of this thesis implements a computational model based on the principle that the strength of association (Cohen, Dunbar, & McClelland, <i>Psychological Review, 1990</i>) between a specific stimulus and its response (Logan, </i>Psychological Review, 1988</i>) is important in determining the influence of the irrelevant dimension. This model has no translation mechanism. A final experiment was conducted to test this model; the model accounted for over 98% of the variance in RTs and 92% of the variance in interference and facilitation scores in both the Stroop and Reverse Stroop tasks independent of whether a translation was required.