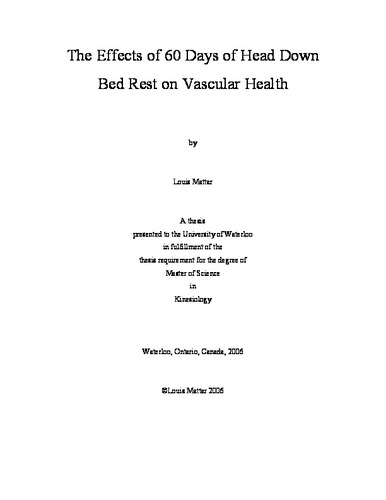 This study was designed to test the hypothesis that 60 days continuous head down bed rest (HDBR), an Earth-based analogue of the effects of space flight, would elevate factors that increase vasoconstriction and would increase markers of vascular inflammation. The study incorporated countermeasures consisting of treadmill running within lower-body negative pressure and resistive "flywheel" exercise (exercise countermeasure, EX) or an increased protein intake of 0. 6 g/kg body weight/day (dietary countermeasures, DIET) to determine whether these interventions might prevent the vasoconstrictor and inflammatory responses when compared to a control (CON) group. Markers of vascular health measured in the study include the vasoactive molecules angiotensin II (Ang II), endothelin-1 (ET-1), and nitric oxide metabolites (NO<sub>met</sub>); and markers of inflammation including C-reactive protein (CRP), and the adhesion molecules E-selectin (E-sel), intracellular adhesion molecule-1 (ICAM), and vascular cell adhesion molecule-1 (VCAM). Twenty four women were housed at the MEDES clinic in Toulouse, France, as part of a large international study (Women International Space Simulation for Exploration, WISE) in which various experimental protocols and countermeasures were integrated into a single experimental design completed during two campaigns. Each 100 day campaign included 20 days of pre-testing (pre-HDBR), 60 days of bed rest (HDBR), and 20 days of post-testing (post-HDBR). The experimental countermeasures were applied only during the 60-day HDBR period. Following 60 days of HDBR, many changes occurred in the concentrations of the measured molecules. Specifically, the concentration of Ang II significantly increased in the CON and DIET groups (52. 9%, p = 0. 014; and 124. 4%, p <0. 0001 respectively), but not in the EX group. Also, NO<sub>met</sub> decreased in all groups, with reductions in the EX and DIET groups (p = 0. 013, and p = 0. 056 respectively). Markers used to assess vascular inflammation increased following the HDBR. The increase in CRP in the CON and DIET groups and the decrease in the EX group from pre- to post-HDBR were not significant; however, the directional changes resulted in an interaction between group and HDBR (p = 0. 052). The adhesion molecule E-sel was significantly increased in the DIET group (p = 0. 003), and VCAM was significantly increased in the CON group (p = 0. 016) with a smaller increase in the DIET group (p = 0. 08). No changes in adhesion molecules were observed in the EX group. This study demonstrated that 60 days of HDBR by young, healthy, women caused changes in several different molecules that are beginning to emerge as risk factors for the development of cardiovascular diseases. Further, it was observed that regular, vigorous exercise during HDBR prevented these changes. These results suggest that future studies of this kind should directly monitor the effects of simulated space flight on vascular health in men and women to obtain a greater understanding of the adaptations that might occur during long term space exploration missions. HDBR can be considered an extreme model of physical inactivity and could be used to provide insight into mechanisms of disease processes associated with the sedentary lifestyle that is prevalent in Western society.