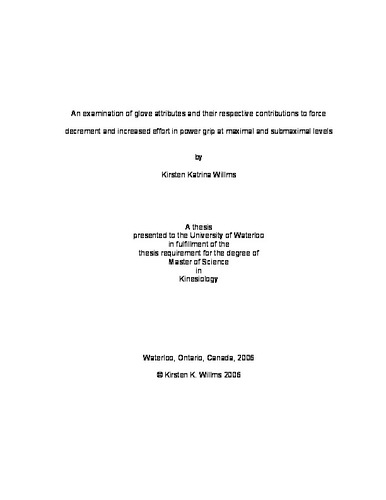 Gloved work has been shown to increase the effort required to perform manual tasks. In power grip tasks, these differences have been observed as reductions in strength and increases in muscular effort. Decreases in force output have been attributed to a number of factors, including loss of tactile sensitivity, glove flexibility or suppleness, thickness, changes in hand geometry, and friction at the glove-object interface. Glove research has rarely quantified glove attributes, and often compared gloves of varying material and physical properties. This research had the unique opportunity to control for a number of these properties by using three sets of identical gloves (powerline maintainers? insulating rubber gloves), differing only in thickness. <br /><br /> Administering the Von Frey Hair Test indicated that the gloves did indeed decrease tactile sensitivity. This research showed that increasing glove thickness led to large decreases in maximum power grip force. Small changes in hand geometry, such as increased interdigital space or grip span, affected force output. In the same hand posture, participants increased their grip force with increasing glove thickness for the object lifting task but were able to maintain a fixed submaximal force with visual feedback. The decrease in tactile sensitivity is a likely cause of this difference. <br /><br /> Muscular activity was affected by wearing the gloves while performing manual tasks. Inconsistent responses of muscular activation were seen in gloved maximum grip effort, while overall increases in electromyographic activity were recorded for tasks at submaximal levels when wearing gloves. <br /><br /> Interdigital spacing had different effects on maximal and submaximal tasks. For maximum effort power grip, interdigital spacing decreased force output by as much as 10%, with no significant changes in muscle activation. For submaximal tasks, no significant differences were seen in muscular activity or in force output. The overall force capability of the gloved user is hindered by changes in interdigital spacing at near maximal effort, but does not appear to be for tasks requiring lower grip force, such as the lifting task which required roughly 20%MVC. Overall, the effect of wearing these gloves on the users, the powerline maintainers, is a substantially increased effort to work. This research contributes to a greater understanding of why and how gloves inhibit performance.

Kirsten Willms (2006). An examination of glove attributes and their respective contributions to force decrement and increased effort in power grip at maximal and submaximal levels. UWSpace. http://hdl.handle.net/10012/2800