Protective Responses during a Sideways Fall: Effects of Secondary Tasks 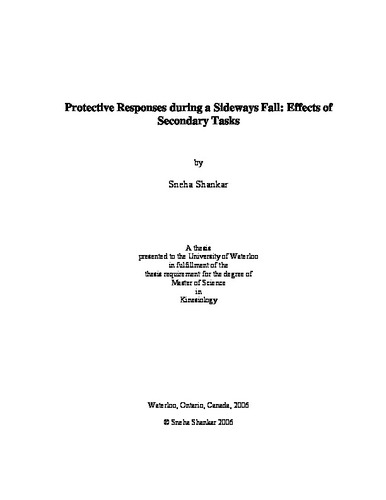 Falls and hip fractures are a major public health problem among the elderly. In addition to bone strength, sideways falls and direct hip impact are important determinants for hip fracture. However, few falls actually cause serious injury in both young and older adults. Therefore, understanding how individuals facilitate a safe landing during a fall will help guide appropriate exercise-based training programs. The primary purpose of this thesis was to investigate the effects of secondary tasks on movement strategies during a sideways fall. <br /><br /> To address this aim, I used a tether and electromagnet to suddenly release subjects from a sideways leaning position, causing them to fall onto a gymnasium mat. I instructed subjects to "fall and protect yourself, as if you were landing on a hard surface". I acquired trials in four conditions, presented in a pseudo-random order: falling while holding a box, falling while holding an empty mug, falling while reciting spoken text, and falling with no secondary task. In most trials, regardless of condition, impact occurred to the lateral aspect of the pelvis (no secondary task = 87%, box = 82%, cognitive = 90%, mug = 79%). While the frequency of impact to both hands decreased when carrying an object (box=67%, mug=50% compared to cognitive=90% and no secondary task=85%), 40% of trials in the mug condition involved one hand contacting the ground, indicating hand impact was still common. It appears when protective movements such as impact to the knees and hands did occur, they were not used to avoid direct hip impact. Instead, they were used to help break the fall, and to avoid head impact, which was not seen in this experiment. The results from this study indicate that secondary tasks have minimal effects on fall responses and that the rare occurrence of hip fractures in the young is due to some combination of bone strength and effective use of body segments to break the fall. <br /><br /> In a second study, I examined how a cognitive task affected the ability of young women to rotate forward (FR) or backward (BR) during a sideways fall. Subjects were released from a sideways leaning position and were provided with a visual cue upon tether release instructing them on the desired direction of rotation. The site of impact on the pelvis (as reflected by the hip proximity angle) was closer to the lateral aspect of the hip in cognitive trials than in control trials (43 ± 18º versus 51 ± 19º in FR and 59 ± 18º versus 68 ± 18º in BR) (p=0. 0006). This was due to a longer delay in the initiation of rotation in cognitive trials (293 ± 60 ms versus 232 ± 71 ms in FR and 278 ± 87 ms versus 239 ± 60 ms), as opposed to a change in mean angular velocity. Pelvis impact velocity was similar in the two conditions (2. 6 ± 0. 3 m/s compared to 2. 7 ± 0. 3 m/s in FR trials and 2. 8 ± 0. 2 m/s compared to 2. 9 ± 0. 2 m/s in BR trials) (p=0. 0514). The results from this study indicate that involvement in a secondary task can impair safe landing responses. Secondary attentional tasks cause a delay in the initiation of fall protective responses, which alters landing configuration. However, the motor programme that governs falling, remaining consistent across condition is robust to changes in task execution at the onset of the fall.