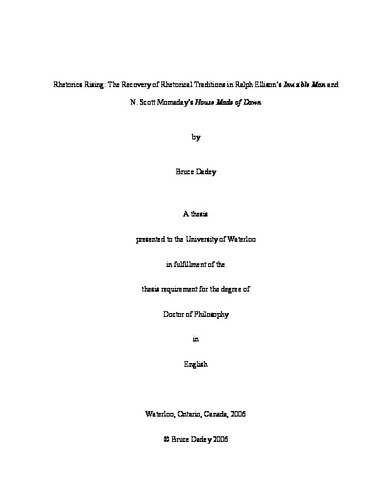 This study suggests, through a rhetorical analysis of the role of orators and oration in Ralph Ellison's <em>Invisible Man</em> and N. Scott Momaday's <em>House Made of Dawn</em>, that literature can be a valuable resource for the study of comparative and contrastive rhetoric; conversely, it also demonstrates that a knowledge of culturally-specific rhetorical and narrative practices is important for understanding ethnic-American novels and their social significance. Written during periods of intense racial upheaval in the United States, <em>Invisible Man</em> and <em>House Made of Dawn</em> are, to use a term coined by George Kennedy, metarhetorics: works that explore, from cross-cultural and intercultural perspectives, the ends and means of rhetoric and the ways in which rhetoric is linked to the formation of individual, ethnic, and national identities. This exploration is undertaken through the diegetic rhetoric of the novels, the depiction of rhetorical practice within their fictional worlds. Ellison's young orator, who vacillates between accommodationist, communist, and African American vernacular rhetorics, and Momaday's alienated protagonist, who is healed through the postcolonial rhetoric of a Peyotist street preacher and the ritual rhetoric of a displaced Navajo chanter, both illustrate how the recovery of traditional rhetorical practices is an integral part of cultural empowerment. The interaction of culturally-specific systems of rhetoric is also embodied in the extradiegetic rhetoric of the novels, the means by which the novels themselves influence their readers. Central to the novels' own rhetorical effectiveness is their authors' strategic appropriation of modernist techniques, which allowed the works to negotiate multiple literary traditions or social contexts, to penetrate and transform the American canon, and to accommodate and affect readers from a broad range of cultural backgrounds.