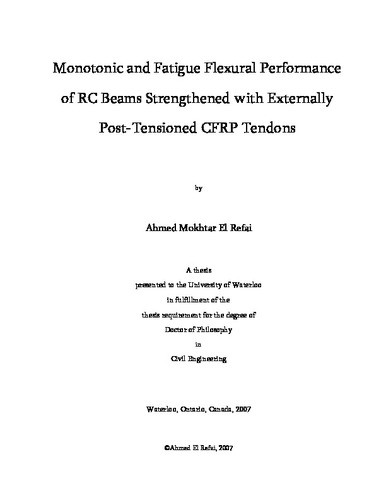 External post-tensioning is an attractive technique for strengthening reinforced concrete structures because of its ability to actively control stresses and deflections, speed of installation, minimum interruption for the existing structure, and ease of inspection under service conditions. However, external prestressing implies exposing the tendons to the environment outside the concrete section, which may lead to corrosion in steel tendons. Therefore, the interest in using fiber reinforced polymer (FRP) tendons, which are corrosion resistant, has increased. The present work investigated, experimentally and analytically, the flexural performance of reinforced concrete beams strengthened with externally post-tensioned Carbon FRP (CFRP) tendons, under monotonic and fatigue loadings. Initially, tensile fatigue tests were carried out on CFRP tendon-anchor assemblies to assess their response under repeated cyclic loads, before implementing them in the beam tests. New wedge-type anchors (Waterloo anchors) were used in gripping the CFRP specimens. The assemblies exhibited excellent fatigue performance with no premature failure occurring at the anchorage zone. The fatigue tests suggested a fatigue limit of a stress range of 10% of the tendon ultimate capacity (approximately 216 MPa). Monotonic and fatigue experiments on twenty-eight beams (152x254x3500 mm) were then undertaken. Test parameters included the tendon profile (straight and double draped), the initial loading condition of the beam prior to post-tensioning (in-service and overloading), the partial prestressing ratio (0.36 and 0.46), and the load ranges applied to the beam during the fatigue life (39% to 76% of the yield load). The CFRP tendons were post-tensioned at 40% of their ultimate capacity. The monotonic tests of the post-tensioned beams suggested that overloading the beam prior to post-tensioning increased the beam deflections and the strains developed in the steel reinforcing bars at any stage of loading. However, overloading had no significant effect on the yield load of the strengthened beam and the mode of failure at ultimate. It also had no discernable effect on the increase in the tendon stress at yielding. The maximum increase in the CFRP stress at yield load was approximately 20% of the initial post-tensioning stress, for the in-service and overloaded beams. A very good performance of the strengthened beams was observed under fatigue loading. The fatigue life of the beams was mainly governed by the fatigue fracture of the internal steel reinforcing bars at a flexural crack location. Fracture of the bars occurred at the root of a rib where high stress concentration was likely to occur. No evidence of wear or stress concentration were observed at the deviated points of the CFRP tendons due to fatigue. The enhancement in the fatigue life of the strengthened beams was noticeable at all load ranges applied. Post-tensioning considerably decreased the stresses in the steel reinforcing bars and, consequently, increased the fatigue life of the beams. The increase in the fatigue life was slightly affected by the loading history of the beams. At the same load range applied to the beam, increasing the amount of the steel reinforcing bars for the same post-tensioning level decreased the stress range in the bars and significantly increased the fatigue life of the strengthened beams. In the analytical study, a monotonic model that predicts the non-linear flexural response of the CFRP post-tensioned beams was developed and implemented into a computer program. The model takes into account the loading history of the strengthened beams prior to post-tensioning (in-service and overloading). Good agreement was obtained between the measured and the predicted monotonic results. A strain-life based fatigue model was proposed to predict the fatigue life of the CFRP post-tensioned beams. The model takes into consideration the stress-strain history at the stress raisers in the steel bars. It accounts for the inelastic deformation occurring at the ribs during cycling and the resulting changes in the local mean stresses induced. Good agreement between the experimental and predicted fatigue results was observed. A step-by-step fatigue design approach is proposed for the CFRP externally post-tensioned beams. General conclusions of the study and recommendations of future work are given.