The Discursive Construction of Punk: Language and Identity in Russia’s Punk-Rock ‘Subculture’ 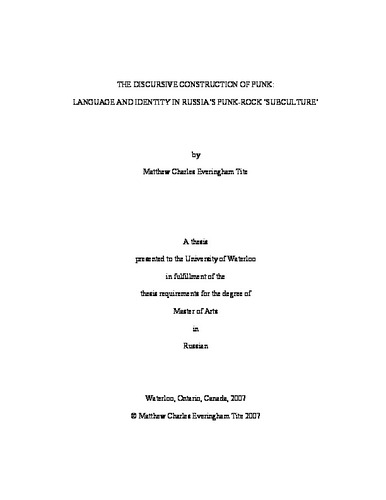 Beginning in the mid 1980s the practices of Soviet youth became a scene of heightened academic interest as western scholars eagerly turned their attention to the changing ‘subcultural’ realities of youth in the wake of the relaxations introduced under Perestroika and Glasnost. Unfortunately, despite this growing interest, the Russian punk community has remained, predominantly on the periphery of scholarly inquiry. One can surmise, however, that a dominant reason for this has been the over-reliance on New Subcultural Theory, which marks many of these studies and which seeks to understand ‘subcultures’ in terms of their homogeneous values and symbolic resistance to a socio-structural Other within a rigid and vertical cultural model. This paradigm, when coupled with prominent western themes exhibited in the behaviour of Russian punks, has led to a somewhat anomalous understanding of this group’s existence and has championed the apparent drive within the academy to discredit both the punk community and its membership as little more than cultural mimics. By drawing on data collected from a Russian punk internet forum located at http://offtop.ru/punkforum, this exploratory grounded theory study investigates (1) how the community exists as a discursive space (2) how individual participants construct and put forward their self-presentation and, (3) to what extent may we consider that these presentations of self both construct, and are constructed by the community? The overall concern of the study is to consider whether a conceptual break from the notion of ‘subculture’ permits a fuller understanding of how individual members’ identities are both constructed by, and construct this particular punk community. The findings suggest that while members exhibit some general commonalities, there is significant diversity among them as well. A key finding is how members become “authentic” in relation to the punk idea, while taking part in the construction of that idea and the group as a whole. This presents a significant departure from the notion of ‘subculture’ and from common-place ideas about punk, namely that being punk involves little more than a style of dress and behaviours. Thus, this exploratory study implies that this Russian punk community is a dynamic discursive space within which identity must continuously be negotiated and renegotiated through language.