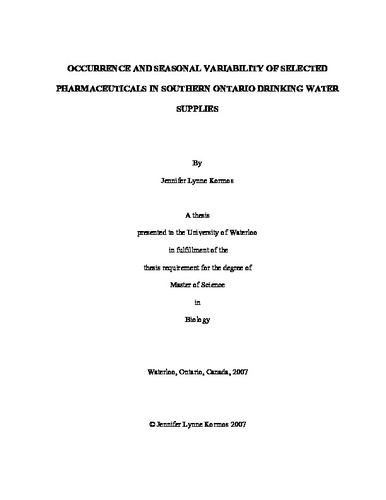 The presence and seasonal variability of human and veterinary pharmaceuticals in surface water (raw water) and treated water samples from two drinking water facilities in Southern Ontario was investigated. Water samples were collected at monthly intervals for one year to characterize the seasonal variability of these contaminants. The presence of these compounds in raw water samples collected from groundwater wells, which were potentially under the influence of surface water, was also examined. All samples were extracted by solid phase extraction (SPE) techniques and analyzed by liquid chromatography coupled with tandem mass spectrometry (LC-ESI-MS/MS). The compounds detected represented different therapeutic classes, including antibiotics, lipid regulating agents and anti-inflammatory drugs. The concentrations detected for most compounds were in the low ng/L range, with one compound being detected close to 1 μg/L. In general, human pharmaceuticals (i.e. gemfibrozil, ibuprofen and carbamazepine) were detected in raw and treated water samples, while the antibiotics were not detected after treatment. Seasonal variability was observed in the concentrations and compounds detected, which could be partially explained by changes in surface water hydrology and sources of contamination. The results demonstrate that the application of conventional treatment technologies were not very effective in reducing some of these compounds from a drinking water facility. In contrast, a second drinking water facility using additional treatment technologies, including ozonation and granular activated carbon (GAC) filters, could reduce the concentrations of these contaminants. Although, the presence of these contaminants in surface water represents a potential risk, the results suggest that appropriate treatment can minimize exposure to at least some of these emerging contaminants.