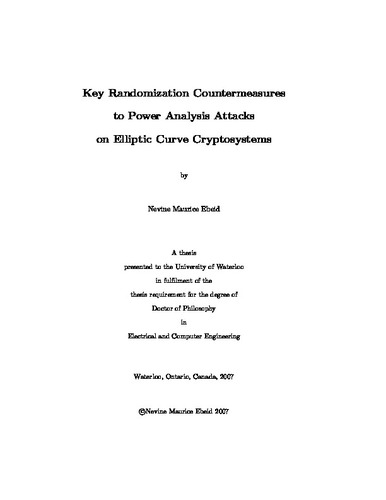 It is essential to secure the implementation of cryptosystems in embedded devices agains side-channel attacks. Namely, in order to resist differential (DPA) attacks, randomization techniques should be employed to decorrelate the data processed by the device from secret key parts resulting in the value of this data. Among the countermeasures that appeared in the literature were those that resulted in a random representation of the key known as the binary signed digit representation (BSD). We have discovered some interesting properties related to the number of possible BSD representations for an integer and we have proposed a different randomization algorithm. We have also carried our study to the $\tau$-adic representation of integers which is employed in elliptic curve cryptosystems (ECCs) using Koblitz curves. We have then dealt with another randomization countermeasure which is based on randomly splitting the key. We have investigated the secure employment of this countermeasure in the context of ECCs.