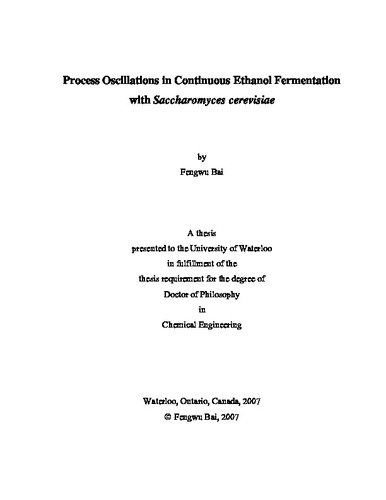 Based on ethanol fermentation kinetics and bioreactor engineering theory, a system composed of a continuously stirred tank reactor (CSTR) and three tubular bioreactors in series was established for continuous very high gravity (VHG) ethanol fermentation with Saccharomyces cerevisiae. Sustainable oscillations of residual glucose, ethanol, and biomass characterized by long oscillation periods and large oscillation amplitudes were observed when a VHG medium containing 280 g/L glucose was fed into the CSTR at a dilution rate of 0.027 h1. Mechanistic analysis indicated that the oscillations are due to ethanol inhibition and the lag response of yeast cells to ethanol inhibition. A high gravity (HG) medium containing 200 g/L glucose and a low gravity (LG) medium containing 120 g/L glucose were fed into the CSTR at the same dilution rate as that for the VHG medium, so that the impact of residual glucose and ethanol concentrations on the oscillations could be studied. The oscillations were not significantly affected when the HG medium was used, and residual glucose decreased significantly, but ethanol maintained at the same level, indicating that residual glucose was not the main factor triggering the oscillations. However, the oscillations disappeared after the LG medium was fed and ethanol concentration decreased to 58.2 g/L. Furthermore, when the LG medium was supplemented with 30 g/L ethanol to achieve the same level of ethanol in the fermentation system as that achieved under the HG condition, the steady state observed for the original LG medium was interrupted, and the oscillations observed under the HG condition occurred. The steady state was gradually restored after the original LG medium replaced the modified one. These experimental results confirmed that ethanol, whether produced by yeast cells during fermentation or externally added into a fermentation system, can trigger oscillations once its concentration approaches to a criterion. The impact of dilution rate on oscillations was also studied. It was found that oscillations occurred at certain dilution rate ranges for the two yeast strains. Since ethanol production is tightly coupled with yeast cell growth, it was speculated that the impact of the dilution rate on the oscillations is due to the synchronization of the mother and daughter cell growth rhythms. The difference in the oscillation profiles exhibited by the two yeast strains is due to their difference in ethanol tolerance. For more practical conditions, the behavior of continuous ethanol fermentation was studied using a self-flocculating industrial yeast strain and corn flour hydrolysate medium in a simulated tanks-in-series fermentation system. Amplified oscillations observed at the dilution rate of 0.12 h1 were postulated to be due to the synchronization of the two yeast cell populations generated by the continuous inoculation from the seed tank upstream of the fermentation system, which was partly validated by oscillation attenuation after the seed tank was removed from the fermentation system. The two populations consisted of the newly inoculated yeast cells and the yeast cells already adapted to the fermentation environment. Oscillations increased residual sugar at the end of the fermentation, and correspondingly, decreased the ethanol yield, indicating the need for attenuation strategies. When the tubular bioreactors were packed with ½” Intalox ceramic saddles, not only was their ethanol fermentation performance improved, but effective oscillation attenuation was also achieved. The oscillation attenuation was postulated to be due to the alleviation of backmixing in the packed tubular bioreactors as well as the yeast cell immobilization role of the packing. The residence time distribution analysis indicated that the mixing performance of the packed tubular bioreactors was close to a CSTR model for both residual glucose and ethanol, and the assumed backmixing alleviation could not be achieved. The impact of yeast cell immobilization was further studied using several different packing materials. Improvement in ethanol fermentation performance as well as oscillation attenuation was achieved for the wood chips, as well as the Intalox ceramic saddles, but not for the porous polyurethane particles, nor the steel Raschig rings. Analysis for the immobilized yeast cells indicated that high viability was the mechanistic reason for the improvement of the ethanol fermentation performance as well as the attenuation of the oscillations. A dynamic model was developed by incorporating the lag response of yeast cells to ethanol inhibition into the pseudo-steady state kinetic model, and dynamic simulation was performed, with good results. This not only provides a basis for developing process intervention strategies to minimize oscillations, but also theoretically support the mechanistic hypothesis for the oscillations.