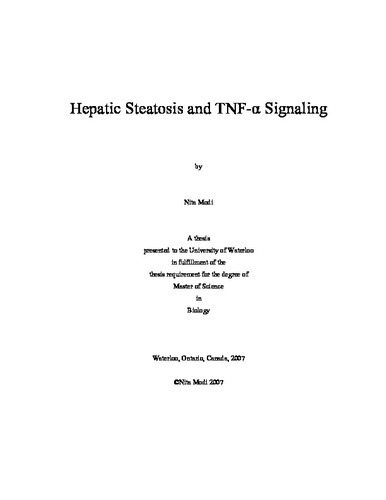 The overall objective of this research was to investigate the status of tumor necrosis factor-α (TNF-α), and molecules associated with its signaling, in the pathological state of hepatic steatosis. The effect of NSAID piroxicam, a cancer preventive agent also known to affect TNF-α signaling on hepatic steatosis, was also investigated. The biological state of the tissue was assessed by examining the expression of TNF-α signaling molecule in whole tissue, as well as in hepatic lipid raft. Lipid rafts are dynamic assemblies of cholesterol and sphingolipids, microdomains that form in the exoplasmic leaflet of the biological membranes shown to play a role in compartmentalization, modulation and integration of the cell signaling. In the present research, Zucker obese rats were used as a model of human obesity and insulin resistant state. These rats exhibit hepatic steatosis in adulthood similar to those noted in obese individuals. Female Zucker obese and lean rats (5 weeks old) were fed a semisynthetic diet with or without piroxicam (150 ppm). Zucker lean counterparts served as control. After 8 weeks of feeding, rats were euthanized and liver from each animal was collected. Liver tissue from each animal was processed for histology and biochemical analysis which included lipids and proteins (COX-1 and 2, TNF-α, TNF-RI and RII, IKK-β, IκB-α and NF-κB). Liver histology and the level of total lipids confirmed that Zucker obese rats had hepatic steatosis, which was further augmented by piroxicam treatment. Whole tissue protein expression, using western blot, showed that the steatotic liver differed from non-steatotic livers by having lower levels of TNF-RII. TNF-RII showed a trend which was inversely proportional to the pathological state of the tissue. The obese-piroxicam liver had the lowest level of TNF-RII and lean livers had the highest (p<0.05). The total NF-κB level was higher in the obese and obese-piroxicam groups compared to the lean or lean-piroxicam groups (p<0.05). Piroxicam treatment lowered the level of NF-κB in obese and lean livers. IκB-α was higher in obese livers than in lean livers. The nuclear level of NF-κB by western blot analysis showed the same pattern as noted in the whole tissue homogenate. However, the difference in the level between obese and lean was marked. The obese nuclei contained two to three fold higher levels of NF-κB protein than the lean liver nuclei. IκB-α level was significantly higher in the obese liver tissues and nuclei than their lean counterparts. While transcriptionally active NF-κB was higher (p<0.05) in the obese livers than in the lean livers, the difference between obese and lean groups was not as significant as that noted for the level of NF-κB assessed by western blot. This suggests that the proportion of active NF-κB present in the nuclear fraction is much higher in the lean than in the obese nuclei. Lipid raft was extracted and identified successfully from obese and lean livers. The total caveolin and flotillin levels were significantly higher in the liver lipid rafts of the obese-piroxicam than that of the other groups. This is the group that also exhibited higher steatosis. Piroxicam treatment significantly decreased the level of caveolin in the lean liver and significantly increased the level of flotillin in the obese liver. While COX-1 was not detectable, however, the level of COX-2 and TNF-RII in lipid raft was opposite to the level noted in the whole tissue homogenate. TNFRII was highest in the obese-piroxicam lipid raft and lowest in the lean-piroxicam lipid raft. TNF-RII, COX-2, IκB-α and NF-κB proteins were the molecules profoundly affected by the pathological state of the tissue and piroxicam treatment. This research is the first to report the presence of IκB-α in the nuclear compartment with a higher level in the nuclei and whole tissue in the obese liver than in the lean liver. This research demonstrates that TNF-α to NF-κB axis is altered in steatotic liver, and analysis of lipid rafts in steatotic and non-steatotic liver demonstrates that lipid rafts play a distinct role in modifying the biological availability of key proteins in the pathological state of liver steatosis.