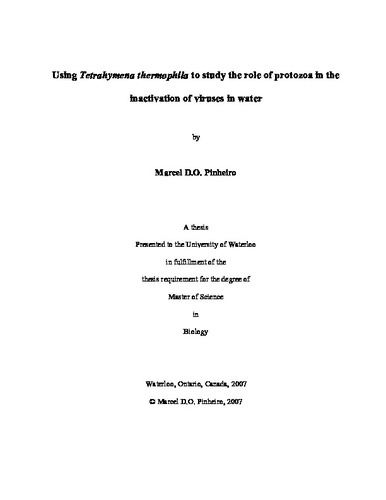 Ciliated protozoa, such as Tetrahymena thermophila, are ubiquitous in the aquatic environment, including in sewage treatment plants. Their ability to graze on particulates could influence water quality in a number of ways, one of which is through their interaction with viruses. The viruses could be bacteriophages or enteric viruses. Bacteriophages can influence water quality by influencing the size and diversity of bacterial populations through the lysis of fast-growing bacteria. This bacterial lysis will affect nutrient cycling in natural waters and effluent quality in sewage treatment, by releasing cell contents and providing slow-growing bacteria an opportunity to establish a stable population. Bacteriophages are also used as surrogates for studying enteric viruses, which are often more difficult to monitor in environmental samples than phage. As a result, studying how bacteriophages are inactivated is important to understanding how to enhance water quality. To this end, I have examined the ability of T. thermophila to inactivate two types of bacteriophages: T4 and MS2. T4 is one of the largest phages; MS2, one of the smallest. The genome of T4 is a single linear molecule of double stranded DNA , making it quite resistant to natural decay. MS2 is a single stranded RNA phage, and susceptible to decay even at room temperature. This phage is sometimes used in environmental monitoring as a substitute for poliovirus. In this study, phage and ciliates were incubated together under different conditions and for varying times, after which the mixture was centrifuged through a step gradient to produce a top layer free of ciliates. Titre was assayed using the double-agar overlay. For T4, the titre in the top layer decreased as co-incubation time increased, but no decrease was seen if T4 were incubated with formalin-fixed Tetrahymena. The T4 titre associated with the pellet of living ciliates was very low, suggesting that removal of the phage by Tetrahymena inactivated T4. In the case of MS2, there was a similar, although smaller, loss of infective phage attributed to viable ciliates. Natural decay of MS2 was detectable, but less than loss due to viable ciliate. MS2 titre when incubated with fixed-Tetrahymena was not found to differ from the no-ciliate control. When Tetrahymena were incubated with SYBR Gold-labeled T4 or MS2 phage, fluorescence was localized in structures that had the size and position of food vacuoles. Incubation of phage with ciliates that had been exposed to cytochalasin B or to 4 oC, conditions inhibiting food vacuole formation, resulted in much lower phage inactivation. When SYBR Gold-labeled phage were incubated with ciliates that had been exposed to these same food vacuole inhibiting conditions, no internal fluorescence was seen. Results suggest the active removal of T4 from fluid by macropinocytosis, followed by digestion in food vacuoles. For MS2, inactivation by Tetrahymena also appeared to occur by macropinocytosis, however the role of micropinocytosis could not be discounted. Studying the inactivation of MS2 is more difficult because of the natural decay of the phage over time in a saline solution. Thus, whether ciliate virophagy is selective or general in regards to viruses, remains unanswered. Either way, phage inactivation by T. thermophila could be occurring in natural waters and sewage treatment plants, and contributing to water quality.

Marcel D.O. Pinheiro (2007). Using Tetrahymena thermophila to study the role of protozoa in the inactivation of viruses in water. UWSpace. http://hdl.handle.net/10012/2767