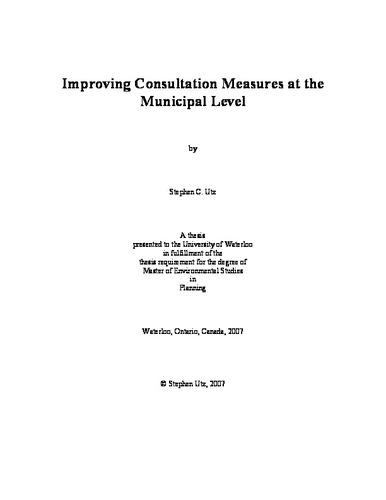 Consulting with the public on planning issues has become an endeavour formalized throughout Western democracies over the past half-century. However, there remains a dichotomy between the legislative minimums for this part of the planning process and the extraordinary efforts of some municipalities. Inefficiencies emerge as attempts are made by many municipalities to implement the contributions received, exposing the potentially different objectives held by each of the major consultation players. Academics suggest that the rationale for consultation appears to have advanced to the point where its value is beyond question, but that the means and frequency for its conduct are not. The literature on the subject is further split between that which focuses on the process of consultation and that which centres on its outcomes. Correspondingly, the fairness of consultation exercises can be viewed from the procedural and distributive points of view. To date, academic study in this field has largely been conducted along qualitative lines. Using a combination of questionnaires, interviews and a focus group to triangulate data received from the major players, an answer was sought to the hypothesis that consultation players possess distinct objectives for this planning exercise. The results indicated that planners and the public do subscribe to separate views for the purpose of consultation, which bias their paradigms of the other parties. Isolating other factors regarding each of these cohort groups further suggested that time, geography, and education often limit the participation of citizens, while planners feel constrained by time, apathy among participants, the political processes and certain fiscal realities. Therefore, changes to planning legislation are recommended that would indirectly reduce the burden for each of the major players by conducting anticipatory consultation. Such measures would reverse the onus of participating while requiring a lesser investment of staff and resources from municipalities. Future research would test the validity of this approach and engage political figures as the final cohort in the triangle of planning participation.