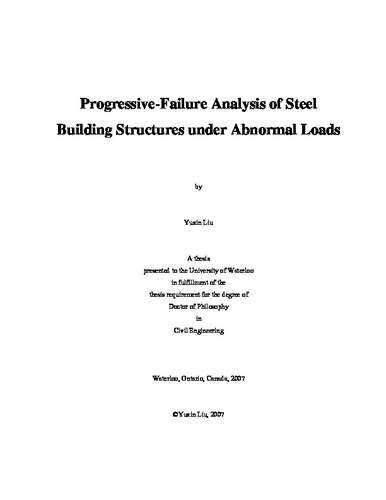 Engineered structures are designed to resist all expected loadings without failure. However, structural failures do occasionally occur due to inadequate design and construction, especially for extreme and abnormal loads. This thesis concerns the progressive collapse of structures due to abnormal loading events, and develops a method of advanced analysis for predicting the progressive collapse behaviour of building structures in the plastic limit state. Combined-stress failure states and stiffness degradation models are proposed to simulate plastic deformation of structural members. Elliptic force-deformation relationships are employed to model the nonlinear material behaviour of members. The stiffness degradation of semirigid connections is modeled by a moment-rotation relationship with four parameters. Having the proposed nonlinear model, a generic member stiffness matrix is derived taking into account elastic-plastic bending, shearing and axial deformations. A computer-based incremental-load nonlinear analysis procedure is developed that progressively updates member stiffness using reduction factors that simulate degraded stiffness behaviour. Three types of localized damage modes are investigated to identify different connection damage scenarios. Account is taken of any debris loading that occurs when disengaged structural components fall onto lower parts of the structure. The associated dynamic effect is taken into account for the quasi-static analysis by utilizing an impact amplification factor. Any progressive collapse occurring thereafter involves a series of failure events associated with topological changes. The progressive-failure analysis procedure is based on the alternate-load-path method suggested in the design and analysis guidelines of the General Services of Administration (GSA, 2003) and the Department of Defense (DoD, 2005). The residual load carrying capacity of the damaged framework is analyzed by incrementally applying prevailing long-term loads and impact debris loads. The deterioration of structural strength is progressively traced to the state at which either global stability is reached or progressive collapse to ground level occurs for part or all of the structure. The analysis procedure is extensively illustrated for several planar steel moment frames, including account for the influence of damaged connections and semi-rigid connection behaviour. The results obtained demonstrate that the proposed method is potentially a powerful tool for the analysis of steel building structures under normal and abnormal loads.