Optimization of Recombinant Protein Production by a Fungal Host 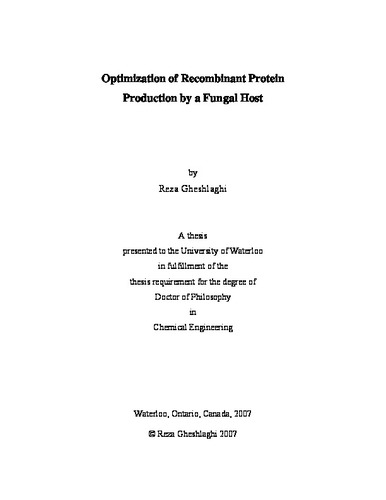 The natural ability of filamentous fungi to synthesize, glycosylate, and secrete high levels of protein products has made them potentially attractive hosts for heterologous protein production. Advances in fungal genetics enabled the expression of several high value proteins in filamentous fungi. Particularly the genus, Aspergillus has proven to be potentially useful for the expression of eukaryotic gene products. This thesis pertains to the optimization of recombinant protein production by the fungal host, Aspergillus niger. The target recombinant protein of interest is hen egg white lysozyme (HEWL). This protein encoded in the genome resulting in relatively stable gene construct; however, it is subject to extracellular protease attack. The objective of the proposed research is the development and application of engineering methodology for the analysis and optimization of a fungal bioprocess for recombinant protein production. The underlying hypothesis is that a significant improvement of target protein productivity is achievable by using appropriate optimization techniques. To accomplish this, during the first phase of this study a statistically based experimental method was used to systematically elucidate the effect of medium components (starch, peptone, ammonium sulfate, yeast extract, and CaCl₂.2H₂O) on hen egg white lysozyme production by Aspergillus niger HEWL WT-13-16. A 2⁵⁻¹ fractional factorial design augmented with center points revealed that peptone, starch, and ammonium sulfate were the most significant factors, whereas the other medium components were not important within the levels tested. Then, the method of steepest ascent was employed to approach the proximity of optimum. This task was followed by a central composite design to develop a response surface for medium optimization. The optimum medium composition for lysozyme production was found to be: starch 34 g/L, peptone 34 g/L, ammonium sulfate 11.9 g/L, yeast extract 0.5 g/L, and CaCl₂.2H₂O 0.5 g/L. This medium was projected to produce theoretically 212 mg/L lysozyme. Using this optimized medium, an experimentally observed maximum lysozyme concentration of 209±18 mg/L verified the applied methodology. A second optimization approach was based on metabolic flux analysis (MFA). A comprehensive metabolic network comprising three intracellular compartments (cytoplasm, mitochondrion and peroxisome) was developed for Aspergillus niger. The metabolic flux network included carbohydrate and amino acid metabolism in both anabolic and catabolic reactions. According to experimental observations, the time course of fermentation was divided into five phases, each with unique physiological properties. The network was used to form a set of linear algebraic equations based on the stoichiometry of the reactions by assuming pseudo-steady state for intracellular metabolites. The metabolic flux model consists of 137 metabolites and 287 processes, of which 181 represent biochemical conversions and 106 represent transport processes between the different compartments and the extracellular environment. In addition, due to the physiological evidence some biochemical reactions considered to be active only in one direction. Linear programming was used for optimizing of the specific growth rate as the objective function in combination with 37 measured input and output fluxes of the key metabolites to evaluate corresponding intracellular flux distributions throughout the batch fermentations. The general applicability of the methodology was evaluated by establishing commonality to optimize recombinant HEWL production. The proposed model was able to predict correctly the specific growth rate, oxygen uptake rate, and carbon dioxide evolution rate with good precision. The results of the metabolic flux and sensitivity analysis were employed for medium design. Growth was biphasic; glucose was utilized initially as the carbon source and was followed by its oxidation product, gluconate, later. Logarithmic sensitivity analysis revealed that the addition of proline, alanine and glutamate benefited growth in defined media. The experimental observations and flux analysis showed that tyrosine was a potential candidate for biomass production improvement. The two amino acids, namely proline and tyrosine benefited biomass production during the initial growth phases. Glutamate and alanine were particularly important during the latter stages of the batch process. A series of growth studies were conducted with the identified amino acids added in the medium. In these preliminary nutritional experiments the contribution to growth enhancement was 46% for proline, 23% for glutamate, and 22% for tyrosine. Model predictions were further verified by conducting batch and fed-batch fermentations in a 7- liter bioreactor. The programmed addition of four amino acids (proline, glutamate, alanine, and tyrosine) according to a predetermined schedule resulted in a 44% improvement in biomass and 41% improvement in recombinant protein production. The experiments also confirmed the model prediction that extra amount of amino acids besides the identified ones would not significantly enhance biomass and the recombinant protein production. A computer-based control system was developed for the on-line monitoring and control of the major state variables (e.g., temperature, pH, and DO) during the time course of fermentation. The graphical programming environment, LabVIEW was used to acquire and integrate these variables in a supervisor computer. The temperature of the bioreactor during sterilization and fermentation was controlled using a cascade methodology. The controller parameters of the master and slave loops were determined experimentally to yield a smooth response with minimum overshoot of both the bioreactor and jacket temperatures. The program scheduled various required steps in an established order during the fermentation. This feature of the software guarantees that every necessary operation will be met. The graphical representation of the process is displayed on the screen and helps the user to follow the process and perform the required adjustments. Furthermore, different variables can be observed simultaneously and saved in text or spreadsheet files for further analysis.