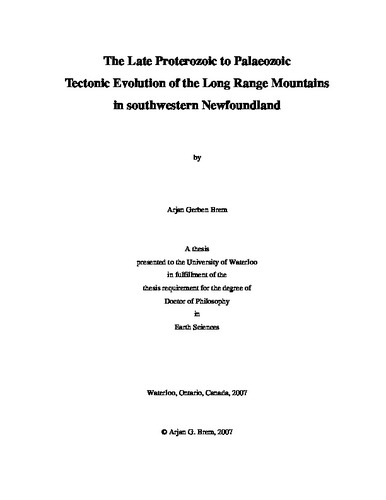 Ever since the first plate-tectonic model for the Appalachians was proposed, the Laurentian margin has been interpreted as having experienced a collision-related dynamo-thermal event during the Middle Ordovician Taconic orogeny. In the western Newfoundland Appalachians, evidence for this collision is well-preserved in the Dashwoods subzone. Nevertheless, rocks of the neighbouring Corner Brook Lake block (CBLB), which is located in the heart of the Laurentian realm, did not show evidence for such an event. Instead, it was affected by Early Silurian Salinic deformation and associated peak metamorphism. Even though this difference in Early Palaeozoic tectonic history between the Dashwoods and the CBLB is widely known, it has not been satisfactorily explained. To better understand the Early Palaeozoic history of the region, in particular to test and better explain the lack of a Taconic dynamo-thermal event in the CBLB, field mapping, microscopic work, and U-Pb and 40Ar/39Ar geochronological studies were undertaken in the western and northern part of the Dashwoods subzone, and in the southern part of the CBLB. In addition, the kinematic history of the Baie Verte-Brompton Line - Cabot Fault Zone (BCZ), the tectonic zone that separates the two unique tectonic fragments, was studied. The western and northern parts of the Dashwoods subzone contain variably foliated igneous units of Middle Ordovician age (ca. 460 Ma) that are associated with the regionally voluminous Notre Dame continental arc. A ca. 455 Ma conjugate set of late syn-tectonic pegmatite dykes in the BCZ demonstrates a dextral sense of shear along the BCZ (DBCZ-1) during the Late Ordovician to earliest Silurian, and constrains the minimum age of the main phase of ductile deformation in the Dashwoods subzone. The fault-bounded CBLB has been affected by a single west-vergent deformational event, constrained between ca. 434 and ca. 427 Ma. More importantly, no evidence – neither petrographic nor geochronological – is present that would indicate that the CBLB was affected by a significant Taconic dynamo-thermal event. Hence, the CBLB and Dashwoods could not have been juxtaposed until after the late Early Silurian. Furthermore, the basement to the CBLB is devoid of any Grenville (sensu lato; ca. 1.0-1.3 Ga) U-Pb ages, which is in sharp contrast with crystalline basement elsewhere in the region, such as the Long Range Inlier. Therefore, it is highly unlikely that the CBLB represents the para-autochthonous leading edge of the Laurentian craton in the Newfoundland Appalachians, as commonly accepted. The CBLB is interpreted as a suspect terrane that has moved over 500 km parallel to the strike of the orogen. Docking to the external Humber Zone is likely to have occurred during the Early Silurian. Final juxtaposition with the Dashwoods took place after the late Early Silurian (post-Salinic) as a result of protracted dextral movement along the BCZ (DBCZ-2 and DBCZ-5). Current tectonic models for the Newfoundland Appalachians mainly focus on well-documented Early Palaeozoic orthogonal convergence of various terranes with the Laurentian margin, but large-scale orogen-parallel movements have rarely been considered. The possibility of large-scale strike-slip tectonics documented here, in addition to the convergent motions, may have significant implications for the tectonic interpretation of the Early Palaeozoic evolution of the Newfoundland Appalachians.