Synthesis and Characterization of Oil-soluble Dispersants 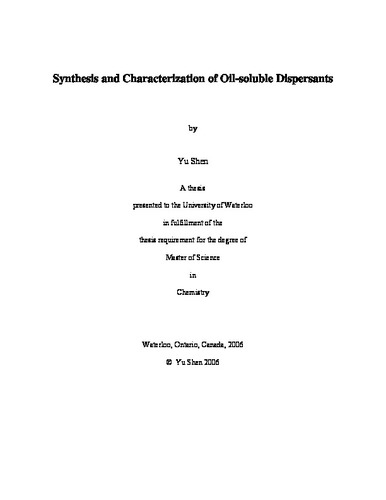 Oil-soluble dispersants are some of the most important additives used by the oil industry. Their function is to reduce the aggregation of carbonaceous deposits produced during the normal operation of the engine. This project aims at studying the efficiency of a series of non-ionic dispersants at stabilizing carbon-rich particles in oil. The dispersants are composed of a polyamine core flanked by two polyisobutylene chains connected to the core via succinimide linkers. The dispersants were synthesized and their chemical composition was characterized by different techniques. The associative strength of the dispersants was determined from their ability to self-associate in solution into reverse micelles. This was established by using fluorescence to measure their critical micelle concentration and the aggregation number of the dispersant micelles in an apolar solvent. The adsorption of the dispersants onto carbon-rich particles was studied by performing adsorption isotherms. The isotherms were analyzed. These studies provide the first example of the correlation that exists between the associative strength of a dispersant and its ability to stabilize carbon-rich particles in apolar solvents.