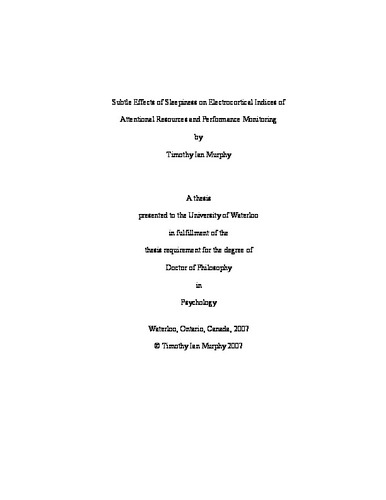 In this dissertation, the effect of mild sleep deprivation on attentional allocation and performance monitoring was investigated using a variety of event-related potential (ERP) paradigms with ecologically realistic periods of sleep deprivation. Seventeen female young adults completed several tasks under alert and sleepy conditions, after 3 and 20 hours of wakefulness, respectively. Objective behavioural measures of response times and error rates indicated virtually no decrements that could be attributed exclusively to sleepiness; however, there were consistent alterations in the ERPs indicative of subtly reduced attentional resources and performance monitoring. The first study (Chapter 2) examined the effect of distraction on the P300, an ERP component related to attention and stimulus processing. Participants performed an auditory oddball task with and without a secondary visual working memory task. Response times (RTs) and P300 amplitudes were affected by the addition of the secondary working memory task. However, an interaction showed that the P300 latency was significantly increased by the secondary task only in the sleepy condition, indicating that processing speed is impaired by a secondary task only when the participant is sleepy. The next study (Chapter 3) used a Go/NoGo contingent negative variation (CNV) task. The CNV is reflective of sustained attention, and is known to be associated with frontal lobe functioning. This task was performed twice, with and without a financial incentive for fast responses, to assess the effect of motivation. The P300 amplitude to the first stimulus and CNV prior to the second were clearly larger to Go stimuli for both levels of alertness when the participant was motivated by the financial incentive. However, with no incentive in the sleepy condition, there was reduced differentiation of the two types of stimuli, indicating a reduced ability to discriminate between important and less important information. In chapters 4 and 5, performance monitoring was examined using two tasks, the Eriksen Flanker task and the Anti-Saccade task, producing an ERP related to errors with two basic components: the error-negativity (Ne/ERN) and error-positivity (Pe), thought to be related to error recognition and error evaluation, respectively. In both data sets, the amplitude of the Ne/ERN was not significantly reduced by sleep deprivation, but the amplitude of the Pe was. In addition, smaller anti-saccade errors produced reduced Ne/ERN amplitudes compared to larger anti-saccade errors. Another marker of performance monitoring is post-error slowing, which was present in the flanker task only during the alert condition. These results indicate that error detection or recognition (Ne/ERN) appears to be relatively preserved during sleep deprivation, but further error evaluation (Pe) and compensation (post-error slowing) are impaired. Taken together, the findings demonstrate that even mild sleep deprivation has a subtle but reliable effect on electrocortical activity associated with attention and performance monitoring despite an absence of behavioural changes, indicating deleterious effects before behavioural changes are observed. Therefore, relying on behavioural tests to determine at what point an individual becomes unsafe to operate machinery or perform various tasks may be misleading.