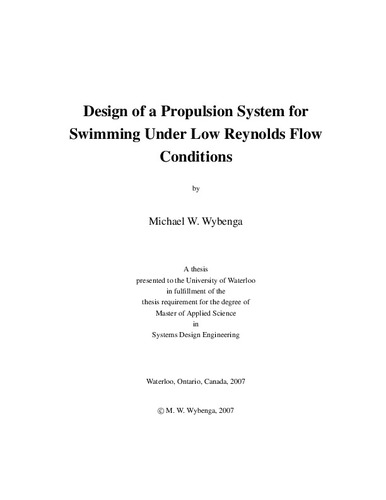 This work focuses on the propulsion of swimming micro-robots through accessible, quasi-static, fluid-filled, environments of the human body. The operating environment dictates that the system must function under low Reynolds number flow conditions. In this fluidic regime, viscous forces dominate. Inspiration is drawn from biological examples of propulsion systems that exploit the dominance of viscous forces. A system based on the prokaryotic flagella is chosen due to its simplicity; it is essentially a rigid helix that rotates about its base. To eliminate the piercing threat posed by a rigid helix, a propulsion system utilizing a flexible filament is proposed. The filament is designed such that under rotational load, and the resulting viscous drag, it contorts into a helix and provides propulsive force. Four mathematical models are created to investigate the behaviour of the proposed flexible filament. An experimental prototype of the flexible tail is built for similar purposes. An experimental rigid tail is also built to serve as a benchmark. The experimental results for propulsive force generated by the rigid tail match the Resistive-Force Theory (RFT) model. An analysis of the system concludes that experimental error is likely minor. An ADAMS model of the rigid tail, as a result of modelling error, under-predicts the propulsive force. The experimental flexible filament shows that the proposed propulsion system is feasible. When actuated, the tail contorts into a `helix-like' shape and generates propulsive force. An ADAMS model of an ideal flexible filament shows that, if a complete helix is formed, there is no loss in performance when compared to a rigid counterpart. The experimental filament is too stiff to form a complete helix and, accordingly, the ADAMS model does not simulate the filament well. To decrease this discrepancy, a second ADAMS model, attempting to directly simulate the experimental filament, rather than an ideal one, is created. Regardless, the second ADAMS model gives confidence that a multi-body dynamic model using lumped-parameter drag forces, after further modifications, can simulate the experimental flexible filament well.