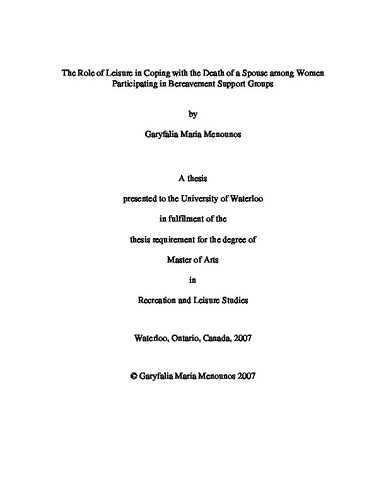 ABSTRACT Over the life course, most people will have multiple encounters with bereavement, one of which is the death of a spouse. Ongoing research on issues associated with bereavement indicates that such a loss is generally the most highly stressful encounter in an adult’s life across the population as a whole. In view of the fact that our population is growing older and most women outlive their husbands, many women find themselves having to learn how to adapt effectively with their loss. This thesis presents the findings of a qualitative study, the purpose of which was to explore the role of leisure and social support in dealing with bereavement among eleven women who had been involved in bereavement support groups following the deaths of their spouses. Data were collected using in-depth interviews. The women described their intense experiences of loss, their involvement in bereavement support groups, the factors that led them to become involved and the ways in which this involvement assisted them in dealing with the loss and in reconstructing their lives. Also, they described the role of leisure in their lives after their loss and the ways in which their involvement in the bereavement support group helped them become re-involved in social leisure. The impact of the support these women received from the professionals and their peers in the bereavement support groups as well as the ways in which their adaptation to their loss was assisted were major themes that emerged from their personal stories. An attempt was made to develop grounded theory or at least a framework that would aid in understanding the relationship between the participants’ involvement in a bereavement support group and their gradual re-involvement in social leisure. It appears that participation in a bereavement support group contributes to a process whereby widows come to accept the loss and adapt or re-construct their lives as single individuals. Throughout the bereavement process, the meaning of leisure for the women in this study shifted from a means of keeping busy and distraction from the stress and anxiety associated with the death of a spouse to one of shared leisure engaged in for pleasure, enjoyment and social connectedness. A need for establishing partnerships between bereavement support groups and community leisure service organizations was identified. These types of links would further facilitate widowed women becoming re-involved in social leisure outside of the support groups in which they participate and help them become more involved in community life in general.

Garyfalia Maria Menounos (2007). The Role of Leisure in Coping with the Death of a Spouse among Women Participating in Bereavement Support Groups. UWSpace. http://hdl.handle.net/10012/2726