The Influence of Implicit Norms on Cognition and Behaviour 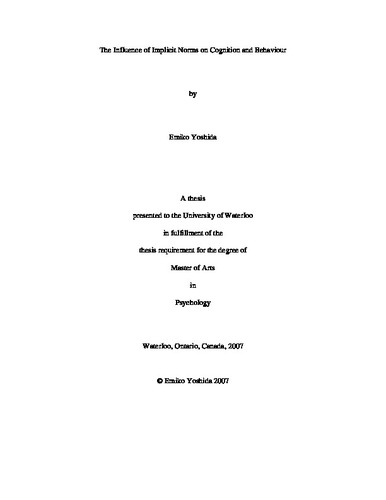 Recent development of implicit measures has enabled researchers to investigate the relation between implicit attitudes and automatic behaviours. Among these measures, the implicit association test (IAT: Greenwald, McGhee Schwartz, 1998) is one of the most widely used measures of implicit attitudes. However, recently, Olson and Fazio (2004) demonstrated that the IAT is contaminated by “extrapersonal associations” and suggested that the personalized version of the IAT is less influenced by these associations. In this paper, we demonstrated that the extrapersonal associations reflect cultural norms and predict meaningful behaviour. In Study 1, we found that the traditional IAT is predicted by both the personalized IAT and our cultural norm IAT. In Study 2, we found the cross-cultural differences in the implicit cultural norms. Finally, in Study 3, we demonstrated that the personalized IAT and normative IAT both predict behaviours among European-Canadians and Asian-Canadians. Thus, our studies provide evidence of predictive validity for the cultural norm IAT.