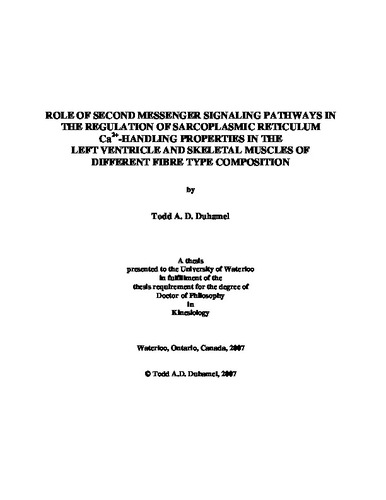 The overall objective of this thesis was to examine mechanisms involved in the acute regulation of sarcoplasmic reticulum (SR) Ca2+-handling properties by second messenger signaling pathways in skeletal and cardiac muscle. The aim of the first study (Chapter Two) was to characterize changes in the kinetic properties of sarco(endo)-plasmic reticulum Ca2+-ATPase (SERCA) proteins in cardiac and skeletal muscles in response to b-adrenergic, Ca2+-dependent calmodulin kinase II (CaMKII) and protein kinase C (PKC) signaling. The aim of the second study (Chapter Three) was to determine if insulin signaling could acutely regulate SERCA kinetic properties in cardiac and skeletal muscle. The aim of the final study (Chapter Four) was to determine if alterations in plasma glucose, epinephrine and insulin concentrations during exercise are able to influence SR Ca2+-handling properties in contracting human skeletal muscle. Data collected in Chapter Two and Chapter Three were obtained using tissue prepared from a group of 28 male Sprague-Dawley rats (9 weeks of age; mass = 280 ± 4 g: X ± S.E). Crude muscle homogenates (11:1 dilution) were prepared from selected hind limb muscles (soleus, SOL; extensor digitorum longus, EDL; the red portion of gastrocnemius, RG; and the white portion of gastrocnemius, WG) and the left ventricle (LV). Enriched SR membrane fractions, prepared from WG and LV, were also analyzed. A spectrophotometric assay was used to measure kinetic properties of SERCA, namely, maximal SERCA activity (Vmax), and Ca2+-sensitivity was characterized by both the Ca50, which is defined as the free Ca2+-concentration needed to elicit 50% Vmax, and the Hill coefficient (nH), which is defined as the relationship between SERCA activity and Ca2+f for 10 to 90% Vmax. The observations made in Chapter Two indicated that b-adrenergic signaling, activated by epinephrine, increased (P<0.05) Ca2+-sensitivity, as shown by a left-shift in Ca50 (i.e. reduced Ca50), without altering Vmax in LV and SOL but had no effect (P<0.05) on EDL, RG, or WG. Further analysis using a combination of cAMP, the PKA activator forskolin, and/or the PKA inhibitor KT5270 indicated that the reduced Ca50 in LV was activated by cAMP- and PKA-signaling mechanisms. However, although the reduced Ca50 in SOL was cAMP-dependent, it was not influenced by a PKA-dependent mechanism. In contrast to the effects of b-adrenergic signaling, CaMKII activation increased SERCA Ca2+-sensitivity, as shown by a left-shift in Ca50 and increased nh, without altering SERCA Vmax in LV but was without effect in any of the skeletal muscles examined. The PKC activator PMA significantly reduced SERCA Ca2+-sensitivity, by inducing a right-shift in Ca50 and decreased nH in the LV and all skeletal muscles examined. PKC activation also reduced Vmax in the fast-twitch skeletal muscles (i.e. EDL, RG and WG), but did not alter Vmax in LV or SOL. The results of Chapter Three indicated that insulin signaling increased SERCA Ca2+-sensitivity, as shown by a left-shift in Ca50 (i.e. reduced Ca50) and an increased nH, without altering SERCA Vmax in crude muscle homogenates prepared from LV, SOL, EDL, RG, and WG. An increase in SERCA Ca2+-sensitivity was also observed in enriched SERCA1a and SERCA2a vesicles when an activated form of the insulin receptor (A-INS-R) was included during biochemical analyses. Co-immunoprecipitation experiments were conducted and indicated that IRS-1 and IRS-2 proteins bind SERCA1a and SERCA2a in an insulin-dependent manner. However, the binding of IRS proteins with SERCA does not appear to alter the structural integrity of the SERCA Ca2+-binding site since no changes in NCD-4 fluorescence were observed in response to insulin or A-INS-R. Moreover, the increase in SERCA Ca2+-sensitivity due to insulin signaling was not associated with changes in the phosphorylation status of phospholamban (PLN) since Ser16 or Thr17 phosphorylation was not altered by insulin or A-INS-R in LV tissue. The data described in Chapter Four was collected from 15 untrained human participants (peak O2 consumption, VO2peak= 3.45 ± 0.17 L/min) who completed a standardized cycle test (~60% VO2peak) on two occasions during which they were provided either an artificially sweetened placebo (PLAC) or a 6% glucose (GLUC) beverage (~1.00 g CHO per kg body mass). Muscle biopsies were collected from the vastus lateralis at rest, after 30 min and 90 min of exercise and at fatigue in both conditions to allow assessment of metabolic and SR data. Glucose supplementation increased exercise ride time by ~19% (137 ± 7 min) compared to PLAC (115 ± 6 min). This performance increase was associated with elevated plasma glucose and insulin concentrations and reduced catecholamine concentrations during GLUC compared to PLAC. Prolonged exercise reduced (p<0.05) SR Ca2+-uptake, Vmax, Phase 1 and Phase 2 Ca2+-release rates during both PLAC and GLUC. However, no differences in SR Ca2+-handling properties were observed between conditions when direct comparisons were made at matched time points between PLAC and GLUC. In summary, the results of the first study (Chapter Two) indicate that b-adrenergic and CaMKII signaling increases SERCA Ca2+-sensitivity in the LV and SOL; while PKC signaling reduces SERCA Ca2+-sensitivity in all tissues. PKC activation also reduces Vmax in the fast-twitch skeletal muscles (i.e. EDL, RG, and WG) but has no effect on Vmax in the LV and SOL. The results of the second study (Chapter Three) indicate that insulin signaling acutely increases the Ca2+-sensitivity of SERCA1a and SERCA2a in all tissues examined, without altering the Vmax. Based on our observations, it appears that the increase in SERCA Ca2+-sensitivity may be regulated, in part, through the interaction of IRS proteins with SERCA1a and SERCA2a. The results of the final study (Chapter Four) indicate that alterations in plasma glucose, epinephrine and insulin concentrations associated with glucose supplementation during exercise, do not alter the time course or magnitude of reductions in SERCA or Ca2+-release channel (CRC) function in working human skeletal muscle. Although glucose supplementation did increase exercise ride time to fatigue in this study, our data does not reveal an association with SR Ca2+-cycling measured in vitro. It is possible that the strength of exercise signal overrides the hormonal influences observed in resting muscles. Additionally, these data do not rule out the possibility that glucose supplementation may influence E-C coupling processes or SR Ca2+-cycling properties in vivo.