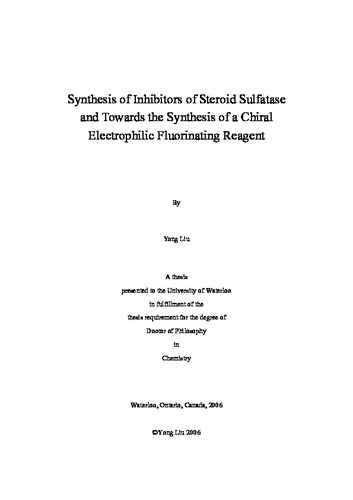 Steroid sulfatase (STS) catalyzes the desulfation of sulfated steroids such as estrone sulfate to the corresponding steroid such as estrone. Inhibitors of STS are believed to have potential for treating estrogen-dependent breast cancer. A new class of potential irreversible suicide inhibitors of STS, based on aryl sulfates bearing a monofluoromethyl or difluoromethyl group ortho to the sulfate group, was synthesized. Key to the success of these syntheses was the use of new sulfation methodology recently developed in the Taylor group. A new and efficient route to 4-formyl estrone, a time-dependent, irreversible STS inhibitor, is also reported. Several new classes of potential, reversible STS inhibitors were synthesized. These compounds are analogs of known STS substrates in which the sulfate group is replaced with an ,-difluoromethylenesulfonamide group, a boronic acid group or a sulfinic acid group. We also report the synthesis of estrone sulfate analogs that bear a carboxylate moiety at the 17-position and a sulfate surrogate at the 3-position. It is anticipated that these compounds will inhibit STS by interacting with Arg98 which lies at the periphery of the active site. Key to the success of this synthesis was the use of the t-butyl group as a protecting group for the 2-position of estrone. Finally, our preliminary investigations into the synthesis of a new class of chiral electrophilic fluorinating agents are presented. These reagents are based on a chiral binaphthyl sulfonimide scaffold and are expected to be capable of performing enantioselective electrophilic fluorinations. Such reagents may be useful in synthesizing organofluorines of biological significance including STS inhibitors.

Yong Liu (2007). Synthesis of Inhibitors of Steroid Sulfatase and Towards the Synthesis of a Chiral Electrophilic Fluorinating Reagent. UWSpace. http://hdl.handle.net/10012/2722