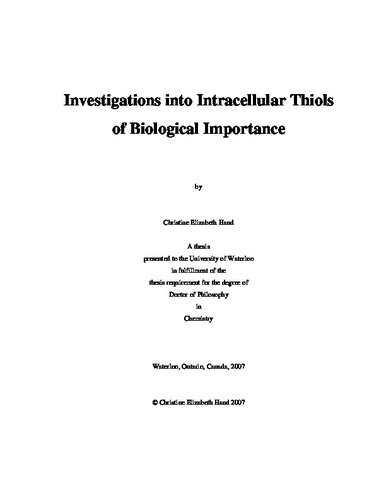 The presence of thiols in living systems is critical for the maintenance of cellular redox homeostasis, the maintenance of protein thiol-disulfide ratios and the protection of cells from reactive oxygen species. In addition to the well studied tripeptide glutathione (γ-Glu-Cys-Gly), a number of compounds have been identified that contribute to these essential cellular roles. Many of these molecules are of great clinical interest due to their essential role in the biochemistry of a number of deadly pathogens, as well as their possible role as therapeutic agents in the treatment of a number of diseases. A series of studies were undertaken using theoretical, chemical and biochemical approaches on a selection of thiols, ergothioneine, the ovothiols and mycothiol, to further our understanding of these necessary biological components. Ergothioneine is present at significant physiological levels in humans and other mammals; however, a definitive role for this thiol has yet to be determined. It has been implicated in radical scavenging in vivo and shows promise as a therapeutic agent against disease states caused by oxidative damage. Given the clinical importance of this intracellular thiol, further investigation into the behaviour of ergothioneine appeared warranted. A high level theoretical study was performed to determine the thermodynamic driving force behind the instability of the ergothioneine disulfide, as well as the thermodynamics of the reactions of ergothioneine with a selection of biologically relevant reactive oxygen species. These results were compared to those determined for a glutathione model compound, as well as the related ovothiols. The latter are believed to act as hydrogen peroxide scavengers in vivo and are currently under review as possible therapeutics against oxidative damage. The structural differences between the ovothiols and ergothioneine dramatically affect their reactivity and this study investigates the thermodynamic driving forces behind these differences. Mycothiol is the major thiol found in the Actinomycetales bacteria, which include the causative agent of tuberculosis, and the enzymes which use mycothiol have been identified as important targets for the development of novel antimicrobials. To better understand the in vivo behaviour of mycothiol, a thorough conformational search was performed to determine what, if any, trends exist among the low energy conformers expected to be present in solution. Knowledge of the conformations preferred by mycothiol may aid in the design of substrate-based inhibitors targeted at mycothiol-dependent enzymes. In addition, the efforts towards the identification of a mycothiol-dependent glyoxalase system are described. The glyoxalase system is essential for the detoxification of methylglyoxal, a toxic by-product of glycolysis, and this system would serve as a target for the design of new therapeutics against tuberculosis and other pathogenic Actinomycetales bacteria. In addition to the study of intracellular thiols, this work details a preliminary theoretical study of the thermodynamics of the phosphorylation of proteinaceous serine residues by inositol pyrophosphates in eukaryotic cell-free extracts. It has been postulated that this observed activity may represent a novel signalling pathway in eukaryotes. This study focused on the effect of inositol pyrophosphate structure and overall charge on the thermodynamics of these reactions. This information should contribute to our understanding of this novel cellular phosphorylation process.