Site of Emerging Memory: Ritual of Recollection in Post-Communist Sofia 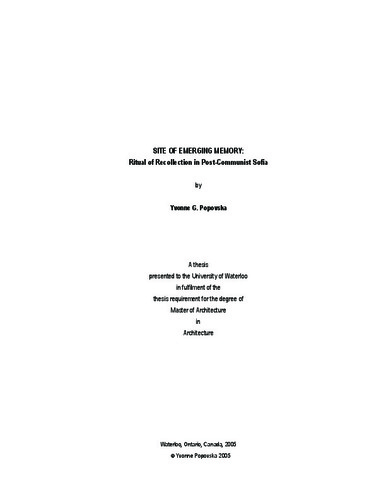 Collective memory emerges within our physical realm through material and spatial manifestations that link personal and collective conceptions of the past and present. The role of the memorial, as the primary urban element of collective memory, aims to encourage selective remembrance and reconciliation as part of a cultural healing process held over time. This thesis is situated in the city of Sofia, at a site of collective traumatic memory: the site of the former G. Dimitrov Mausoleum. Once considered the icon of Bulgarian communism, this building was symbolically demolished in 1999, following the collapse of the regime, leaving a scar in the heart of the city’s fabric and consciousness. This site, along with its abandoned adjacent public square, has become a significant representation of the urge found across all of the former Eastern Bloc countries, to suppress and erase the memory of the recent traumatic past, as a means to heal. However, without any efforts to commemorate, reconcile or face the past, the restrictive environment of oppression during the regime has in turn been replaced by an environment of repression, where mourning has become an impossible task. The modern tradition of public commemoration has been founded upon the notion that permanent monuments as physical objects can become representations of collective memory, preserved through time. Throughout the various attempts to create memorials, this assumption has remained for the most part unquestioned. However, the memorial as such has recently faced a major debate, as the issues of memory and forgetting have emerged as dominant concerns in dealing with the trauma that continues to haunt modern Western culture. Consciously discrediting the reality of the events and the victims associated, the Bulgarian culture has created a form of disconnect between its identity and its collective memory. Challenging the static forms and detached imagery, this proposal will reexamine the traditional definition of the monument as object on pedestal. By revisiting the site where the void left by the demolished mausoleum still haunts those trying to forget, and allowing the memory to emerge back into the collective consciousness, this proposition will allow the trace of the past to be transformed and connected to a new city narrative of remembrance. An engaged and dynamic ritual, beginning and ending at the memorial site, will draw a connection between space, time and memory through a series of new public spaces. Through the recovery of collective memory, it will offer an alternative to the healing process. The memorial is dedicated to the countless victims of censorship and control during the Iron Curtain regime.