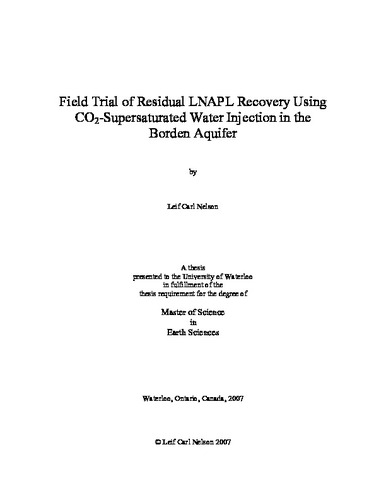 The ability of supersaturated water injection (SWI) to recover non-aqueous phase liquids (NAPLs) was studied at the field scale as part of an ongoing program to evaluate its applicability to groundwater remediation. SWI uses Gas inFusionTM technology to efficiently dissolve gases into liquids at elevated pressures. SWI has been shown to both volatilize and mobilize residual NAPL ganglia (Li, 2004). During SWI pressurized water containing high concentrations of CO2 is injected into the subsurface below the zone of contamination. Once the injected water is in the aquifer the pressure drops substantially and the concentration of CO2 is no longer in equilibrium with the water and as a result CO2 bubbles nucleate. These bubbles then migrate upwards through the contaminated zone towards the water table. As they move they come into contact with residual NAPL ganglia and they either volatilize this NAPL, resulting in a bubble comprised of CO2 and gaseous NAPL, or mobilize this NAPL, resulting in a film of NAPL surrounding the bubble. In either case the bubbles continue to rise until they reach the water table at which point they are removed by a dual phase extraction system. In this work, a known amount of NAPL was emplaced below the water table at residual concentrations to represent a residual source of weathered gasoline. The source was created in a hydraulically isolated cell in an unconfined sand aquifer at CFB Borden, Ontario. After the source was emplaced SWI was used to remove as much of the contaminant mass as possible in 22.25 days of operation over three months. The goal of this project was to determine if SWI was capable of removing residual NAPL at a field site. It was successful in removing volatile NAPL but not non-volatile NAPL. 64% of the volatile compounds were removed but contaminant mass was still being removed when the system was shut down so with continued operation more mass would have been removed. There is no way of knowing how much more would have been removed had the project continued. These results indicate that continued development of the technology is warranted.