Palmprint Identification Based on Generalization of IrisCode 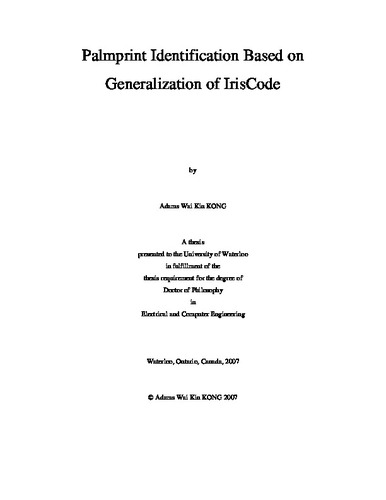 The development of accurate and reliable security systems is a matter of wide interest, and in this context biometrics is seen as a highly effective automatic mechanism for personal identification. Among biometric technologies, IrisCode developed by Daugman in 1993 is regarded as a highly accurate approach, being able to support real-time personal identification of large databases. Since 1993, on the top of IrisCode, different coding methods have been proposed for iris and fingerprint identification. In this research, I extend and generalize IrisCode for real-time secure palmprint identification. PalmCode, the first coding method for palmprint identification developed by me in 2002, directly applied IrisCode to extract phase information of palmprints as features. However, I observe that the PalmCodes from the different palms are similar, having many 45o streaks. Such structural similarities in the PalmCodes of different palms would reduce the individuality of PalmCodes and the performance of palmprint identification systems. To reduce the correlation between PalmCodes, in this thesis, I employ multiple elliptical Gabor filters with different orientations to compute different PalmCodes and merge them to produce a single feature, called Fusion Code. Experimental results demonstrate that Fusion Code performs better than PalmCode. Based on the results of Fusion Code, I further identify that the orientation fields of palmprints are powerful features. Consequently, Competitive Code, which uses real parts of six Gabor filters to estimate the orientation fields, is developed. To embed the properties of IrisCode, such as high speed matching, in Competitive Code, a novel coding scheme and a bitwise angular distance are proposed. Experimental results demonstrate that Competitive Code is much more effective than other palmprint algorithms. Although many coding methods have been developed based on IrisCode for iris and palmprint identification, we lack a detailed analysis of IrisCode. One of the aims of this research is to provide such analysis as a way of better understanding IrisCode, extending the coarse phase representation to a precise phase representation, and uncovering the relationship between IrisCode and other coding methods. This analysis demonstrates that IrisCode is a clustering process with four prototypes; the locus of a Gabor function is a two-dimensional ellipse with respect to a phase parameter and the bitwise hamming distance can be regarded as a bitwise angular distance. In this analysis, I also point out that the theoretical evidence of the imposter binomial distribution of IrisCode is incomplete. I use this analysis to develop a precise phase representation which can enhance iris recognition accuracy and to relate IrisCode and other coding methods. By making use of this analysis, principal component analysis and simulated annealing, near optimal filters for palmprint identification are sought. The near optimal filters perform better than Competitive Code in term of d’ index. Identical twins having the closest genetics-based relationship are expected to have maximum similarity in their biometrics. Classifying identical twins is a challenging problem for some automatic biometric systems. Palmprint has been studied for personal identification for many years. However, genetically identical palmprints have not been studied. I systemically examine Competitive Code on genetically identical palmprints for automatic personal identification and to uncover the genetically related palmprint features. The experimental results show that the three principal lines and some portions of weak lines are genetically related features but our palms still contain rich genetically unrelated features for classifying identical twins. As biometric systems are vulnerable to replay, database and brute-force attacks, such potential attacks must be analyzed before they are massively deployed in security systems. I propose projected multinomial distribution for studying the probability of successfully using brute-force attacks to break into a palmprint system based on Competitive Code. The proposed model indicates that it is computationally infeasible to break into the palmprint system using brute-force attacks. In addition to brute-force attacks, I address the other three security issues: template re-issuances, also called cancellable biometrics, replay attacks, and database attacks. A random orientation filter bank (ROFB) is used to generate cancellable Competitive Codes for templates re-issuances. Secret messages are hidden in templates to prevent replay and database attacks. This technique can be regarded as template watermarking. A series of analyses is provided to evaluate the security levels of the measures.