Behaviour of Oxygenates and Aromatic Hydrocarbons in Groundwater from Gasoline Residuals 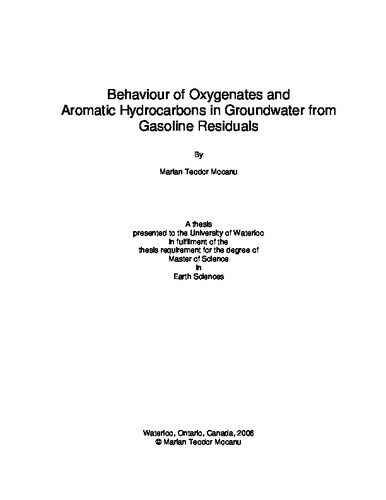 ABSTRACT This study focuses on the dissolution and near-source attenuation of oxygenated gasoline hydrocarbons in groundwater from two gasoline residual sources: one containing gasoline with 9.8% methyl tert butyl alcohol (MTBE) and 0.2% tert-butyl alcohol (TBA) (GMT source) and the other containing gasoline with 10% ethanol (E10 source). The sources were injected into a shallow sand aquifer, leaving a residual plume to dissolve under natural gradient conditions. The MTBE plume (from the GMT source) and the ethanol plume (from the E10 source) were compared with predictions by the BIONAPL numerical model assuming ideal source dissolution and no biodegradation of the oxygenates or aromatic hydrocarbons. While the complete mass of injected MTBE appeared to pass row 2, little MTBE was found further downgradient. This mass loss was considered to be an artifact of the monitoring system and of possible biodegradation. The ethanol mass flux was better captured in the E10 gate. Essentially all the ethanol from the E10 source also passed row 2, but, the ethanol mass flux decreased somewhat from row 2 to row 4. The better mass recovery may reflect that the ethanol plume remained more in the center of the monitoring network as compared to the MTBE plume some of which may have bypassed the monitoring fence. MTBE, TBA, and ethanol in the model were assumed to dissolve at equilibrium. The MTBE and TBA concentration breakthrough curves are generally consistent with equilibrium dissolution. However, the mass flux values suggest non ideal dissolution. The ethanol concentration breakthrough curves and mass flux are consistent with equilibrium dissolution. Also, the observed concentrations were often higher than predicted at later times. These features could be due to non-equilibrium (kinetically-limited) dissolution However, non-ideal source conditions may have arisen due to most of the oxygenates being dissolved into the water injected along with the gasolines thus distributing the residual gasoline in a non-uniform manner. The concentrations of aromatics are higher than expected from the BIONAPL model and are consistent with tailing expected with non-equilibrium dissolution. However, the probable complexity of the source concentration distribution likely account for much of the concentrations variability. There were insufficient electron acceptors to support complete mineralization of either the oxygenates or the BTX-TMB compounds. Although, evidence of weak MTBE biodegradation was found, the major mass loss seemed to be related to the uncertainties in the monitoring network. Some ethanol mass loss could be attributed to fermentation to organic acids (which were not sought in the field experiment). The persistence of BTX-TMB through the gates seemed to be slightly greater in the presence of ethanol. The field study was also used to test the Ratio Mass Estimation (RME) method of estimating the initial NAPL mass in the source from downgradient contaminant concentrations. The method was found reasonably reliable if the downgradient concentrations were collected close to the source where biodegradation was minor.