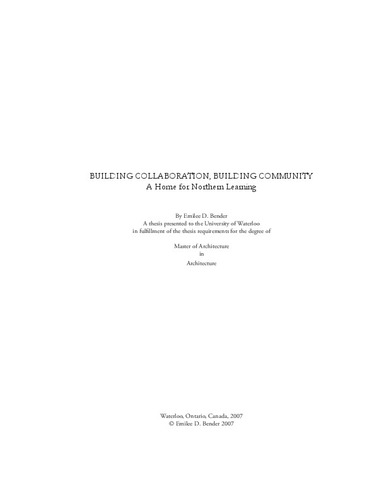 Building Collaboration, Building Community: A Home for Northern Learning explores the potential for architecture to support learning endeavors in the Canadian North. Informed by traditional approaches to northern learning for cultural continuity, alongside the assimilative effects of the residential school experience, the thesis strives to develop an environment for contemporary northern learning where both Aboriginal cultures and values can thrive alongside current educational endeavors. Situated within a context plagued by imposed and unsuccessful architectural models, the thesis advocates for a design process rooted in collaborative ideals. At its core, the thesis asserts that both the local knowledge of the community and the training of the architect are vital components in the design process. In the development of an environment for northern learning, both the socio-cultural visions of a northern people and the skill sets of the architect are of necessity. Local stories and perspectives - both past and present - guide project developments. As directed by the community, the scope of work does not focus solely upon the formal learning environment, but rather upon a series of social and cultural structures designed to support learners within the northern educational context. Technically, as informed by traditional architectural predecessors, the contemporary forms are developed in accordance with the local climate: the proposed architecture invites its inhabitants to thrive within the immediate northern landscape. Ultimately, these explorations – of community vision and technical design - are synthesized into a series of design vignettes for a student living community in Yellowknife, Northwest Territories. The ideas housed within the architectural translations and the broader thesis documentations are not finite conclusions but rather they form the foundation for future investigations: they provide a starting point for continued dialogues and developments.