The Sigma-Delta Modulator as a Chaotic Nonlinear Dynamical System 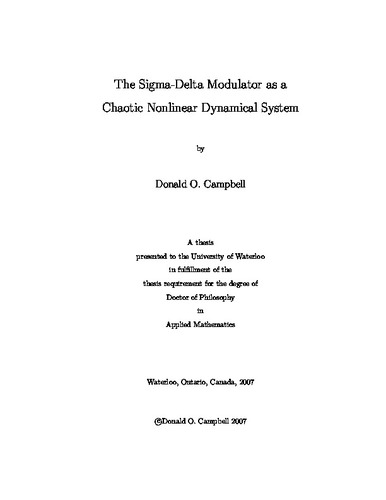 The sigma-delta modulator is a popular signal amplitude quantization error (or noise) shaper used in oversampling analogue-to-digital and digital-to-analogue converter systems. The shaping of the noise frequency spectrum is performed by feeding back the quantization errors through a time delay element filter and feedback loop in the circuit, and by the addition of a possible stochastic dither signal at the quantizer. The aim in audio systems is to limit audible noise and distortions in the reconverted analogue signal. The formulation of the sigma-delta modulator as a discrete dynamical system provides a useful framework for the mathematical analysis of such a complex nonlinear system, as well as a unifying basis from which to consider other systems, from pseudorandom number generators to stochastic resonance processes, that yield equivalent formulations. The study of chaos and other complementary aspects of internal dynamical behaviour in previous research has left important issues unresolved. Advancement of this study is naturally facilitated by the dynamical systems approach. In this thesis, the general order feedback/feedforward sigma-delta modulator with multi-bit quantizer (no overload) and general input, is modelled and studied mathematically as a dynamical system. This study employs pertinent topological methods and relationships, which follow centrally from the symmetry of the circle map interpretation of the error state space dynamcis. The main approach taken is to reduce the nonlinear system into local or special case linear systems. Systems of sufficient structure are shown to often possess structured random, or random-like behaviour. An adaptation of Devaney's definition of chaos is applied to the model, and an extensive investigation of the conditions under which the associated chaos conditions hold or do not hold is carried out. This seeks, in part, to address the unresolved research issues. Chaos is shown to hold if all zeros of the noise transfer function lie outside the unit circle of radius two, provided the input is either periodic or persistently random (mod delta). When the filter satisfies a certain continuity condition, the conditions for chaos are extended, and more clear cut classifications emerge. Other specific chaos classifications are established. A study of the statistical properties of the error in dithered quantizers and sigma-delta modulators is pursued using the same state space model. A general treatment of the steady state error probability distribution is introduced, and results for predicting uniform steady state errors under various conditions are found. The uniformity results are applied to RPDF dithered systems to give conditions for a steady state error variance of delta squared over six. Numerical simulations support predictions of the analysis for the first-order case with constant input. An analysis of conditions on the model to obtain bounded internal stability or instability is conducted. The overall investigation of this thesis provides a theoretical approach upon which to orient future work, and initial steps of inquiry that can be advanced more extensively in the future.