Effects of Myristoylation on the Structure and Stability of Hisactophilin 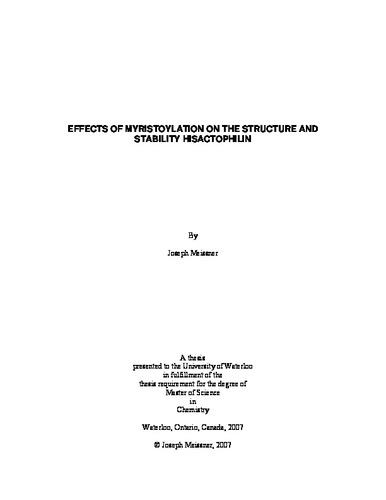 Hisactophilin is a histidine rich, actin binding protein from Dictyostelium discoideum. The structure of Hisactophilin, an all-beta protein, is typical of the beta-trefoil superfamily of proteins. In addition, hisactophilin is myristoylated, which is a relatively common co-translational modification involving the covalent attachment of a myristic acid group to the N-terminal glycine of a protein. For most modified proteins, a myristoyl group is involved in reversible protein-protein and protein-membrane interactions via a myristoyl switch. The majority of studies on the molecular basis of myristoyl switches have focused on characterizing calcium-myristoyl switches, whereas research has suggested that hisactophilin binds reversibly to membranes by means of a pH dependent myristoyl switch. A number of in vivo studies of the modified protein have been completed to study the function of hisactophilin; however, the structure and stability of the protein have only been characterized using the recombinant non-myristoylated protein. In contrast, this study focuses on the effects of myristoylation on hisactophilin structure and stability. Myristoylated hisactophilin has been prepared by a dual plasmid expression system in E. coli. Optimization of the efficiency of myristoylaion was completed for the preparation and purification of myristoylated hisactophilin. Characterization of the structural changes caused by myristoylation were undertaken using multidimensional homo- and heteronuclear NMR experiments. Circular dichroism (CD) was used to obtain low resolution structural data and characterize protein stability as a function of pH using chemical denaturation. The molecular consequences of myristoylation on protein stability and structure, as well as the molecular basis for pH dependent myristoyl switch will be discussed.

Joseph Meissner (2007). Effects of Myristoylation on the Structure and Stability of Hisactophilin. UWSpace. http://hdl.handle.net/10012/2699