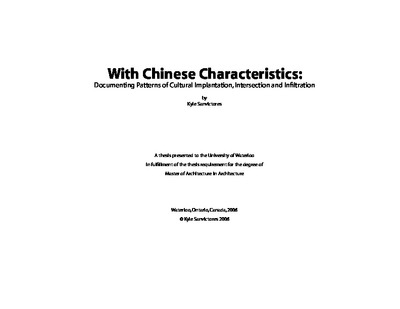 This thesis explores the global traffic in culture and its effects on the urban environment. Two overlapping forces are documented: first the proliferation of Western models and cultural signifiers in China and second the emergence of corresponding patterns resistance. Both these forces are explored on the global and urban scale as they affect the shaping of Shanghai and Toronto. The profusion of Western culture into China has reshaped the country through various periods in its history. Most recently, the whole scale application of Western aesthetics to the built environment has given rise to numerous anomalous places that border on the absurd. This act of cultural erasure has also given rise to a new population, an informal floating population that exists outside of the prevailing system of “progress”. Their forms of habitation and cultural transaction are articulated by informal and non-conforming patterns of development—an underground world. This represents a reaction to marginalization and cultural disenfranchisement. When looking at the formation of Toronto’s own Chinese community, similar patterns of marginalization have promoted the constitution of ethnic enclaves, first in the traditional sense of the urban Chinatown and more recently in the forms of suburban ethnic enclaves. In both cases, the proliferation of these subversive patterns offers a form of reverse colonialism. The thesis parallels the tension of these two forces as they are played out in the formation of the new suburban Chinatown, exploring how this phenomenon is redefining the traditional parameters of Asian Diaspora communities and how these new patterns challenge the traditional model of the suburb. In the last part of the book a speculative proposition is made about the intersection of these two worlds, a world where the thresholds between official and unofficial have been blurred, where they are now coincidental. Throughout the body of research offers a broad sampling of past trajectories and the meeting of current trends. It is an incomplete road map that traces the pathology of cultural exchange in the past and projects their intersection in the future. It offers a way of navigating through the emergent transnational territories engendered by cultural trafficking, documenting anomalies, phenomena and emergent patterns that renegotiate our traditional ideas of the nationality.