Development of a Novel Continuous Process for Hydrogenation of NBR 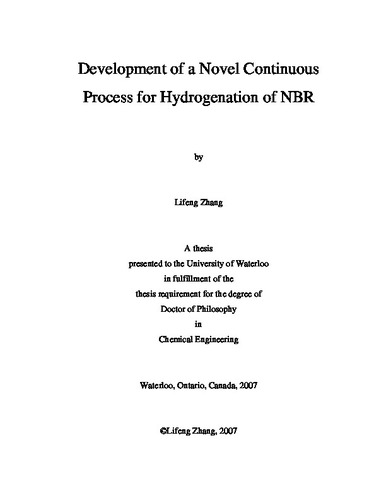 Hydrogenation of nitrile butadiene rubber (NBR) has been carried out industrially for a number of years, producing a material with exceptional resilience to high temperatures and oxidative conditions. Current processes involve a batch reactor which is difficult to optimize further for larger scale production. A continuous process for this particular process is required in order to provide a large volume of production with consistent qualities. The integration of heat balance could be realized in a continuous process. A novel continuous process for hydrogenation of NBR has been developed in the present work. A multistage agitated contactor (MAC) was proposed as a gas liquid reactor for this process. Comprehensive hydrodynamic data have been acquired under various process conditions. The hydrodynamic behaviour under different operating variables such as stirring speed, liquid flow rate and gas flow rate has been understood through experimental study. It is found that an increase in stirring speed intensifies liquid backmixing while an increase liquid flow rate decreases liquid backmixing. The presence of gas flow helps in reducing liquid back mixing by two coupled effects: liquid entrainment effect due to a cocurrent operation manner and a strengthening effect of liquid flow rate due to its reduction of liquid hold-up. Contradictory conclusions regarding the effect of liquid viscosity on liquid backmixing in a MAC have been resolved through experimental investigation and computational fluid dynamics (CFD) simulations. It is shown that an increase in liquid velocity dampens turbulence which contributes to liquid phase backmixing within the reactor. The established hydrodynamic understanding of MACs in the present work widens its potential application for gas liquid process. Based on comprehensive understanding of the proposed reactor, a bench-scale prototype was designed and constructed in order to demonstrate hydrogenation performance. One more efficient catalyst for NBR hydrogenation, an osmium-based catalyst, was used in the present work. Hydrogenation degree of NBR in the continuous unit was investigated at operating conditions relevant to industrial applications. It is indicated from the experimental results that a desired hydrogenation degree of over 95% in 2.5% and 5% NBR solutions can be achieved at the conditions investigated. It is also shown that both system pressure and catalyst loading increase hydrogenation conversion. Mathematical modeling of the designed process was established by coupling the intrinsic catalytic hydrogenation from batch studies and flow behavior of the reactor. A cascade of stirred tanks with back flow (CTB) model was used to characterize the dynamic hydrogenation performance in a MAC. The comparison of experimental results and numerical prediction indicates that the established model could satisfactorily predict the hydrogenation in the designed process with consideration of approximately 30%-50% catalyst deactivated due to impurities and oxygen contamination in the polymer solution. A revised n CSTRs-in-series model was proposed to predict the hydrogenation degree at steady state and a good agreement was found when comparing the predicted results with the experimental data. A continuous process for hydrogenation at a pilot scale was designed based on the primary results from the bench scale process. A process with a capacity of 50 tons/year was targeted and the hydrogenation efficiency provided by the pilot scale unit has been estimated through the established reactor model.