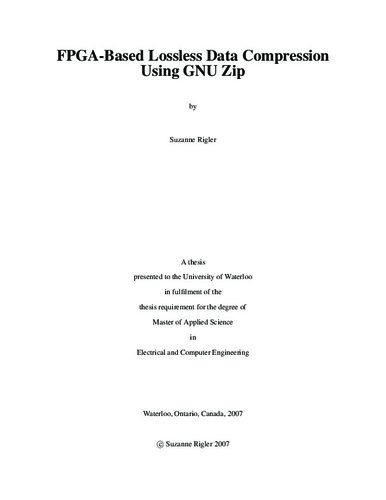 Lossless data compression algorithms are widely used by data communication systems and data storage systems to reduce the amount of data transferred and stored. GNU Zip (GZIP) [1] is a popular compression utility that delivers reasonable compression ratios without the need for exploiting patented compression algorithms [2, 3]. The compression algorithm in GZIP uses a variation of LZ77 encoding, static Huffman encoding and dynamic Huffman encoding. Given the fact that web traffic accounts for 42% [4] of all internet traffic, the acceleration of algorithms like GZIP could be quite beneficial towards reducing internet traffic. A hardware implementation of the GZIP algorithm could be used to allow CPUs to perform other tasks, thus boosting system performance. This thesis presents a hardware implementation of GZIP encoder written in VHDL. Unlike previous attempts to design hardware-based encoders [5, 6], the design is compliant with GZIP specification and includes all three of the GZIP compression modes. Files compressed in hardware can be decompressed with the software version of GZIP. The flexibility of the design allows for hardware-based implementations using either FPGAs or ASICs. The design has been prototyped on an Altera DE2 Educational Board. Data is read and stored using an on board SD Card reader implemented in NIOS II processor. The design utilizes 20 610 LEs, 68 913 memory bits, and the on board SRAM, and the SDRAM to implement a fully functional GZIP encoder.