Characterization and expression patterns of five Winter Rye β-1,3-endoglucanases and their role in cold acclimation 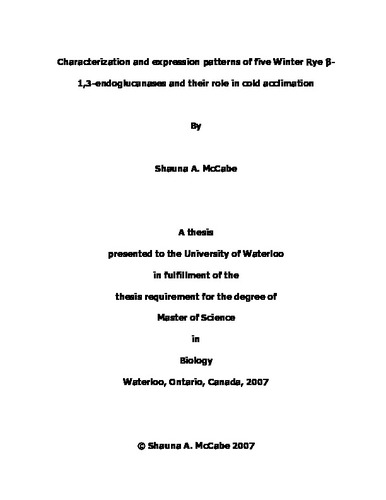 Winter rye produces ice-modifying antifreeze proteins upon cold treatment. Two of these antifreeze proteins are members of the large, highly conserved, β-1,3-endoglucanase family. This project was designed to identify glucanase genes that are expressed during cold acclimation, wounding, pathogen infection, drought or treatment with the phytohormones ethylene and MeJa. Additionally, a more detailed proteomic analysis was to be carried out to evaluate the glucanase content of the apoplast of cold-acclimated (CA) winter rye. Results of 2D SDS-PAGE analysis revealed that non-acclimated whole leaf protein extracts contain at least two β-1,3-endoglucanses while CA whole leaf protein extracts contain at least three β-1,3-endoglucanses. Subsequent 2D SDS-PAGE analysis was conducted on the apoplast extracts of NA and CA winter rye plants revealed the limitations of standard 1D SDS-PAGE. The 2-dimensional gel analysis revealed that there is a minimum of 25 proteins within the apoplast of CA winter rye, including at least 5 β-1,3-endoglucanases. Genome walking was used to isolate cold-responsive glucanase genes. The five genes isolated were designated scGlu6, scGlu9, scGlu10, scGlu11 and scGlu12. The cis-element pattern within the promoter of each gene was evaluated using online databases of documented plant cis elements. As expected, all of the promoters contained elements associated with cold, biotic and abiotic stresses, light regulation, and development. The expression patterns predicted by the cis elements in each promoter were compared to the mRNA abundance produced by each gene as detected by semi-quantitative reverse transcriptase PCR. In most cases, the abundance of transcripts arising from each gene loosely corresponded to the expression pattern predicted by the cis elements the corresponding promoter. Transcripts of scGlu9, 10 and 11 were present in cold-treated tissues and are candidates for β-1,3-endoglucanases with antifreeze activity. The results presented in this thesis provide additional insight into the apoplast proteome of CA winter rye plants as well as the complexity of the signals controlling the proteins that reside there. Although there are still a number of unresolved questions, this research opens new directions for future studies in the cold acclimation process in winter rye and specifically for the contribution of β -1,3-endoglucanses.