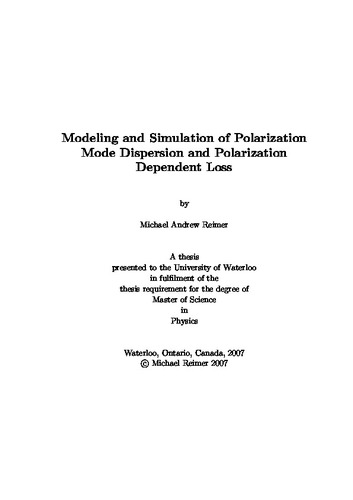 Novel theoretical formulations and efficient simulation methods for polarization-mode dispersion (PMD) and polarization-dependent loss (PDL) that are directly applicable to optical network design are developed. In particular, a formalism based upon the Magnus expansion is advanced for the determination of the frequency evolution of the Mueller matrix in terms of increasing orders of PMD and PDL. Several previous models of polarization evolution are shown to be specializations of this more general formalism. A least-squares algorithm that extracts PMD and PDL coefficients from repeated measurements of the output Stokes vector of an optical system for a random set of input polarization states is introduced and subsequently applied to the rapid experimental determination of the probability density of the differential group delay of a fiber-squeezer based PMD emulator. The applicability of Clifford algebra and Pade-approximant techniques to the efficient simulation of the wavelength dependence of PMD and PDL is also discussed.