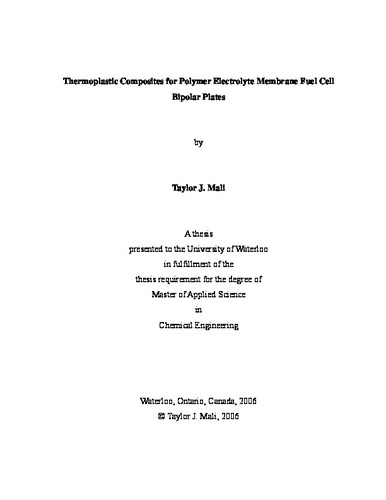 Polymer electrolyte membrane fuel cells (PEMFCs) exhibit encouraging potential as an enabling technology for the Hydrogen Economy. Currently an important barrier to commercialization is the cost associated with existing PEMFC materials; this project’s goal was to investigate alternative materials for PEMFC bipolar plates. Conductive thermoplastic materials offer the promise of low density, low cost processing, and inexpensive resins, and were the focus of material development for PEMFC bipolar plate applications. In order to develop a thermoplastic bipolar plate this study utilized the combination of a low cost injection moldable commodity polymer resin, and low cost carbon materials as conductive fillers. The materials selected and tested included; a polypropylene copolymer; acetylene carbon black; Vulcan carbon black; and short carbon fiber. The components were combined in a twin screw extruder and injection molded into samples for testing. The result was a spectrum of composite samples with a range of filler loadings from 0 to 60 wt% and varying filler type ratios. Synergy between the different carbon types was achieved which led to better physical properties, specifically conductivity. The novel blends produced were tested for electrical conductivity, mechanical properties, rheology, microscopy, and actual plates were made and tested in a single cell PEMFC. These trials enabled discussion around the feasibility of the materials with respect to processability, cost, and performance (both in the fuel cell and in potential applications). The most significant results were measured using a composite blend with 54 wt% filler loading and a 1:1:1 filler ratio. Mechanical results achieved 68% and 100% of the industry targets for tensile and flexural strength, respectively. Tensile strength attained 27.7 MPa and flexural strength measured 82.8 MPa. Electrical conductivity results for the same samples varied between the two methods of measurement used. Using a fuel cell industry recommended procedure 2.2 S/cm was achieved and using a four point ASTM measurement technique 12.0 S/cm was reported. These values represent 3% to 12% of the industry target. Actual 16 cm2 fuel cell plates were produced, fuel cell hardware constructed and assembled, and the power output was found to be 51% relative to graphite plates. Thermoplastic bipolar plates for PEMFCs made of composite materials is promising, but optimum filler loading that balances all properties is still required in order to achieve conductivity targets. Nevertheless this study has demonstrated that conductive thermoplastic bipolar plates can be produced via injection molding.