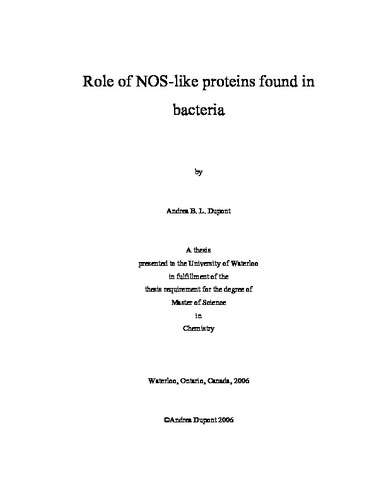 Nitric oxide (•NO) is a molecule with diverse biological effects involved in both signaling and defense mechanisms in mammalian systems. The production of •NO is catalyzed from L-Arginine by a family of enzymes known as nitric oxide synthases (NOS). All mammalian isoforms contain an active site oxygenase domain and an electron-donating reductase domain joined by a calmodulin binding region. Recently, prokaryotic homologues to the oxygenase domain of mammalian NOS enzymes have been identified. Although several bacterial NOS (bNOS) enzymes have been characterized, their function is still unknown. Possible roles for this enzyme could include: (i) intercellular signaling to coordinate cellular/infectious activity, (ii) regulation via •NO-mediated posttranslational modifications, or (iii) nitration of compounds in different biosynthetic pathways. Efforts, contained in this thesis, to determine a probable role for this enzyme are two-fold: (i) via a search for possible interacting protein partners, and (ii) via a proteomic analysis of the effects of a knockout of the bNOS gene. Bacterial-NOS knockouts in Bacillus subtilis and Bacillus cereus have been created. 2D-Differential in gel electrophoresis (DIGE) has been used to analyze the proteomic effects of the expression of this gene in B. subtilis. Thus far 16 proteins which exhibited significant changes in expression, with a p value ≤ 0.05 and fold change ≥│2│, have been isolated and identified by peptide mass fingerprinting (PMF) in order to shed light on the relevance of this bacterial NOS homologue. The proteins which have been identified thus far are involved in cellular metabolism, amino acid metabolism and nitrogen metabolism. The identification of further proteins is required for a broader view of the impact of the expression of this gene on the proteome.