Production and Modeling of Recombinant Protein 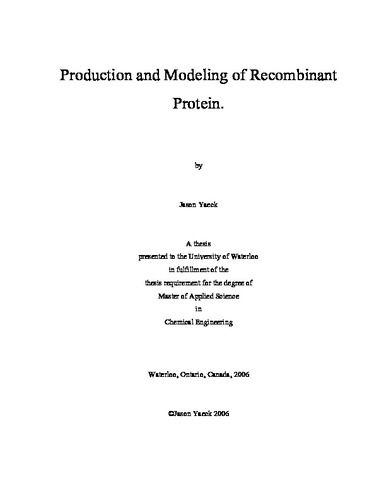 Computational models of recombinant production of tissue-type Plasminogen Activator (tPA) were created, studied and compared for two hosts, Chinese Hamster Ovary (CHO)cells and Escherichia coli (E. coli), using SuperPro® Designer. In addition, several fermentations were run using enhanced Yellow Fluorescent Protein (eYFP) in E. coli to provide knowledge for the SuperPro model and to explore the effect of temperature when used to maintain dissolved oxygen in a high density fed-batch fermentation. The models show that production of tPA is feasible using either host, but under the current basecase CHO holds the economic advantage despite the initial higher capital costs. In order to become more competitive with CHO, production using E. coli must become higher on a cell specific level and the potential of refolding insoluble protein in inclusion bodies should be explored. Since E. coli’s growth rate allows for higher plant throughput in a given production year, if this was combined with strains which produce higher titers of protein than those available in literature, it would allow E. coli to become competitive with CHO for the production of recombinant tPA. Experiments demonstrate that temperature control can be used to slow the metabolic rate of E. coli, allowing aerobic conditions to be maintained in the high density fermentations. Although temperature reduction has also been used to increase the yield of soluble protein, it is likely this occurs with reduced protein production. Temperature control was initiated using five minute moving averages to monitor overall oxygen and stirrer speed trends. Temperature was dropped 5 °C when averaged oxygen content fell below 18% and averaged stirrer speeds were greater than 1000 rpm. Temperature controlled runs for E. coli BL21DE3 producing eYFP appeared to allow the cultures to maintain better aerobic conditions. It is known that eYFP was produced since homogenized cell paste fluoresced yellow under UV light. However, protein analysis was hampered due to low protein production even after induction. Purifications involving large amounts of cell paste (50 g or more) were difficult to perform and all purificitiatons resulted in contamination by other proteins. Several recommendations can be made. The modeling would be greatly facilitated by additional information such as equipment specifications at large-scale production. The work with eYFP containing E. coli would be greatly enhanced by better strain selection. Choosing strains which over-express the protein of interest on the small scale would lead to better results in the fermentor. A densiometric analysis of the SDS PAGE gels run would allow a better understanding of general proteomic response to temperature control. When combined with mass spectrometry this may lead to different approaches in reducing temperature. Temperature control is often thought to increase soluble protein. From the densiometric SDS PAGE analysis of both the supernatant and pellet after homogenization it would be interesting to examine the partioning of recombinant protein into soluble and insoluble forms in future experiments.