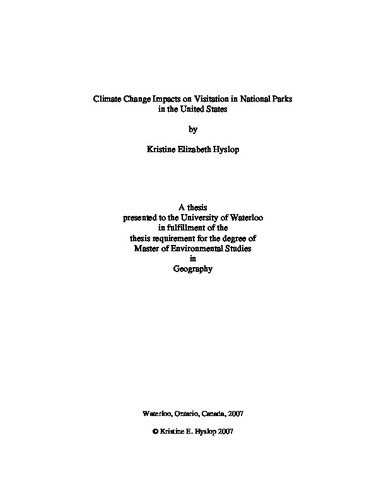 Tourism is one of the largest industries in the world and it continues to grow at a rapid pace. Tourism is dependent upon weather and climate, particularly the length and quality of the outdoor recreation season for nature-based tourism, since it is directly affected by weather. Indirectly, the natural biophysical resources that outdoor tourism is based upon can also be altered by climate. Thus, climate change has the potential to affect nature-based tourism that takes place in national parks and other protected areas. Of the studies that analyse the impacts of climate change in national parks, the vast majority focus on conservation policy and planning rather than tourism. This study applies a single variable regression analysis technique to empirically evaluate the affects of climate change on the quantity and seasonal patterns of visitation to United States national parks under a range of climate change scenarios for the 2020s, 2050s, and 2080s (The Met Office Hadley Centre CM3 B21 (United Kingdom) and Commonwealth Scientific and Industrial Research Organisation MK2B A11 (Australia) climate models were used for the Alaskan parks, and the National Center for Atmospheric Research PCM B21 (United States) and Centre for Climate Systems Research NIES A11 (Japan) models were used for the contiguous states). Fourteen parks are included in the study, representing 12 different climate regimes across the country and 58% of total visitation to all national parks in the United States in 2005. In general, the number of visits to parks in the northern regions of the country, excluding Alaska, is projected to increase annually, with the majority of increases occurring in the spring and fall shoulder seasons. In Alaska, there is no consistent pattern on an annual basis due to projections being calculated for only the low season (winter) for Denali, and for the high season (summer) for Glacier Bay. Based on these projections, visitation may increase during the low season and decrease during the high season for Alaskan parks. Parks in the south are projected to experience decreased annual visitation as temperatures become uncomfortably hot, particularly under high emissions scenarios. The largest changes in visitation are projected to occur in the 2080s, although some parks may experience noticeable changes as early as the 2020s in particular seasons. Small to moderate changes in visitation (up to 10% annually) are projected with the low emission climate change scenarios, even into the 2080s. Small to large visitation changes (up to 47% annually) are projected using the higher emission climate change scenarios. These visitation changes could lead to the need for substantial management changes in certain US national parks as revenue collected from user fees and operational costs are altered. Additional ecological and social impacts resulting from increased visitation will also need to be critically considered. Where fewer visits are projected, decreased revenue may lead to an inability to properly manage the park. The results of the study can be used by the National Park Service and regional and park managers to plan for visitation changes that might occur as climate change continues over the 21st century.