Impact of the Wisconsinian Glaciation on Canadian Continental Groundwater Flow 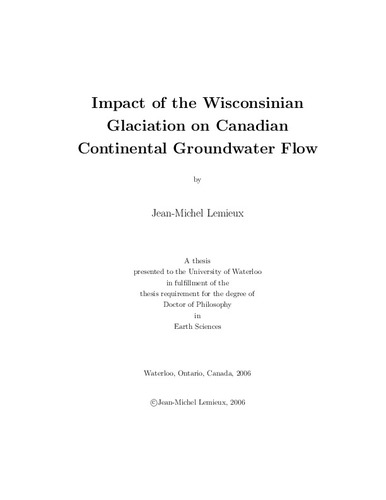 During the Quaternary period, cyclic glaciations have occurred over a global scale as the result of a climatic variability that affected the Earth's atmospheric, oceanic and glacial systems. Quaternary glaciations and their associated dramatic climatic conditions, such as kilometers-thick ice sheet formation and permafrost migration, are suspected to have had a large impact on the groundwater flow system over the entire North American continent. Because of the myriad of complex flow-related processes involved during a glaciation period, numerical models have become powerful tools to examine groundwater flow system evolution in this context. In this study, a series of key processes pertaining to coupled groundwater flow and glaciation modelling, such as density-dependent (i.e., brine) flow, hydromechanical loading, subglacial infiltration, isostasy, sea-level change and permafrost development, are included in the numerical model HydroGeoSphere to simulate groundwater flow over the Canadian landscape during the Wisconsinian glaciation (~ -120 kyr to present). The primary objective is to demonstrate the immense impact caused by glacial advances and retreats during the Wisconsinian glaciation on the dynamical evolution of groundwater flow systems over the Canadian landscape, including surface/subsurface water exchanges (i.e., recharge and discharge fluxes) both in the subglacial and the periglacial environments. The major findings of this study are that subglacial meltwater infiltration into the subsurface dominates when the ice sheet is growing and, conversely, groundwater exfiltrates during ice sheet regression. This conclusion, which seems to be opposite to the classical hydromechanical loading theory, is a consequence of the interaction between the subglacial boundary conditions and the elastic properties of the rocks. Subglacial infiltration rates during ice sheet progression can reach up to three orders of magnitude higher than the infiltration rate into the periglacial environment and the current recharge rate into the Canadian Shield. The impact of the ice sheet on groundwater flow and the brine distribution was dramatic. Hydraulic heads below the ice sheet increase by up to three thousand meters at land surface and up to 1.5 km into the ground. At present time, large over-pressurized zones occur at depth because there has been insufficient time to enable dissipation to their original values. Based on the hydraulic head and solute concentration distribution after the last glacial cycle, it can be shown that the system did not recover to its initial conditions, and that it is still recovering from the last glacial perturbation. The permafrost has the effect of restraining large areas of the subglacial and periglacial environment from surface/subsurface water interaction; the subglacial permafrost appears along with a cold-based ice sheet, which prevents subglacial meltwater production. The occurrence of a shallow trapped pressure zone below the permafrost after the glacial cycle highlights the critical importance of permafrost on the recovery of the flow system after a glacial cycle. As a final contribution, the mean groundwater age across the Canadian landscape at the last interglacial (LIG) and throughout the last glacial cycle was computed. Groundwater age is defined as the time elapsed since the water infiltrated in a recharge zone; the mean groundwater age is the mean age of all the particles of water that would be measured in a sample of water. It was found that at LIG, the mean groundwater ages span a large range of values from zero to 42 Myr. Forty-two Myr old groundwater was calculated at depth where there is little groundwater flow and where a mass of stagnant groundwater exists due to high brine concentrations. During the glacial period, old groundwater below the ice sheet mixes with young subglacial meltwater that infiltrates into the ground and the resulting mean groundwater age is younger. The mixing below the ice sheet occurs at great depth, and locations where the mean groundwater age was older than 1 Myr reaches mean age values between 10 kyr and 100 kyr.