Control of Dynamic Stability during Gait Termination on a Slippery Surface 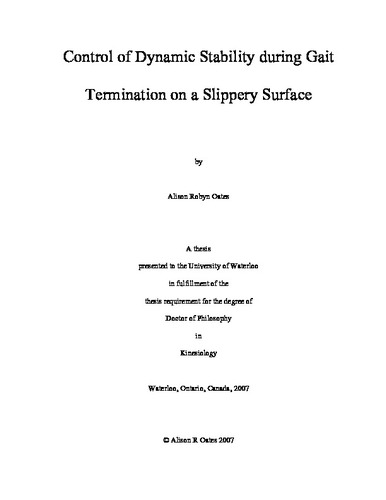 The purpose of this thesis is to investigate the reaction to a purely unexpected slip during gait termination and subsequent experiences stopping on the slippery surface in participants who are young and healthy, older and healthy and who have Parkinson’s disease while on traditional dopamine-replacement medication. Gait termination requires control of the forward momentum of the body’s centre of mass (COM). This forward momentum must be dissipated and the COM held within a newly formed base of support. The challenge of stopping on a slippery surface involves maintaining stability while transitioning from steady-state locomotion to steady-state stance. Experience with a slippery surface changes postural and gait characteristics to diminish the perturbing effect of the slip. The magnitude of the slip response diminishes quickly as the movement becomes more efficient. Our investigations revealed a typical slip response to a purely unexpected slip during gait termination including a lowering of the COM, an increased muscular response to support the body, a shortened step and an arm raise. Knowledge of and experience with the slippery surface quickly changed the slip response to reduce the perturbing effect of the slip and also to increase the efficiency of the response while smoothly transitioning from steady-state locomotion to gait termination. Parkinson’s disease impairs balance control, the ability to switch between motor tasks and also to stop within two steps. The need for a voluntary change in motor programs along with difficulty stopping and increased instability makes gait termination a potentially difficult task for someone with Parkinson’s disease (PD). The participants with PD used a slower, safer strategy to stop on non-slippery surfaces to compensate for their instability compared to age-matched controls. When a slip was first introduced during gait termination, the participants with PD continued to be less stable in the plane of progression than the control group. Despite the instability, the PD group was still able to integrate a balance-correcting response into a voluntary gait termination program. The ability to generate adaptive strategies to integrate the balance-correcting response into a voluntary gait termination program over multiple trials does not appear to be affected by PD; both the control group and PD group showed behavioural modifications according to repeated exposures to the slippery surface. Although participants with PD seemed slightly less stable and walked slower, their behavioural adaptations were similar to the control group.