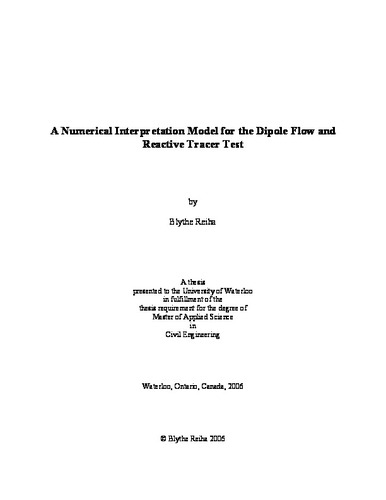 In order to protect public health and the natural environment, regulatory agencies such as the U.S. Environmental Protection Agency (USEPA) and the Ontario Ministry of the Environment (MOE) have developed a variety of clean-up programs to remediate contaminated sites. Before a remedial strategy can be implemented, physical, chemical and biological information of the site must be characterized so that an appropriate remedial approach can be selected. Problems exist with common characterization applications such as non-representative sample collection, time-consuming and costly testing, and loss of sample integrity due to transport. The success of the dipole flow test (DFT) and dipole flow tracer test (DFTT) indicate the potential for identifying a wide range of physical aquifer characteristics through in situ techniques; this has led to the development of the dipole flow reactive tracer test (DFRTT), which can be used to identify sorption and degradation characteristics in addition to those characteristics already identifiable by the DFT and DFTT. The DFRTT contains numerous advantages including the ability to inject a variety of reactive tracers using pulse or continuous injection, it can be used at multiple locations and depths across a site, and it is cost-effective. The focus of this thesis was to develop and validate an efficient numerical framework for the reactive-transport component of the DFRTT interpretation model so that it could be used to simulate a variety of reactive tracers. The model will then be calibrated to match the resulting DFRTT field breakthrough curves (BTCs) so that certain aquifer property values can be obtained. The comprehensive-reactive transport model (CRTM) was developed to solve the advective-dispersive-reactive equation (ADRE) using a streamline-oriented control volume (CV) mesh, to minimize the introduction of numerical dispersion (due to the dipole’s rapidly converging and diverging flow field). In order to reduce computational effort, the ADRE was decoupled using operator-splitting techniques (OS) and the resulting partial differential equation for the transport component was solved using a finite volume approach, while the fourth-order form of Runge-Kutta was used to solve the resulting ordinary differential equation of the reactive component. Four OS techniques were implemented to decouple the ADRE; two of the techniques were iterative, while the other two were non-iterative. The use of iterative OS techniques enabled the introduction of a flux corrected transport (FCT) scheme (in addition to the commonly used central differencing scheme (CDS) and upwind differencing scheme (UDS)), for solving the transport portion of the ADRE. The CRTM was validated against a current “off-the-shelf” model, MODFLOW/MT3DMS. The resulting simulations indicated that the CRTM and MODFLOW/MT3DMS BTCs compared well for a conservative, decaying (first-order), and sorbing (linear sorption isotherm) tracer under specific conditions. However, MODFLOW/MT3DMS illustrated signs of failure when a large flow rate or a small longitudinal dispersivity coefficient was employed. It was concluded that MODFLOW/MT3DMS was unable to handle the rapidly converging and diverging dipole flow field, and that it was necessary to develop/utilize a dipole specific model for modelling the DFRTT application. Analysis of the three advective schemes indicated that CDS was an inappropriate method for the dipole configuration used in the investigation (due its non-monotone solutions), and that the UDS, although unconditionally monotone, produced excessive numerical dispersion. The FCT scheme had the benefits of both CDS and UDS; however, it was computationally slower than the UDS due to its iterative nature. Examination of the OS techniques indicated that in most cases there were no significant differences between any of the OS methods; however if a prominent sink term was utilized, the iterative techniques were deemed superior over the non-iterative techniques because of their ability to correct mass depletion. It was also determined that because of FCTs second-order accuracy, the OS techniques employing FCT had lower errors than those which did not. The CRTM was used to design a DFRTT biodegradation experiment under Canadian Forces Base (CFB) Borden conditions. Dipole parameters were altered so that a dipole configuration could be recommended for field testing. It was determined that a decent zone of influence aquifer volume (~ 65 m3) with a detectable BTC tail occuring between 2 and 3 days required a dipole length = 0.8 m, and a half-chamber length = 0.15 to 0.30 m. The oxidation of toluene by aerobic bacteria present within the Borden aquifer was also simulated. The purpose of these simulations was to obtain a detectable substrate BTC so that experimental parameters could be recommended for conducting a field experiment. To achieve a detectable substrate BTC the following recommendations were made: (i) sampling events should occur once every 1 to 2 hours (if possible) so that the changes in effluent concentration can be documented accurately; (ii) dipole parameters from Section 5.1 with a standard 2” well should be employed; (iii) a large substrate concentration should be utilized (> 4.0 mg/L); (iv) a flow rate of 1x10-4 m3/s should be used; and (v) an injection duration of 2 hours should be applied. As long as the field substrate BTC is measurable then Monod kinetics parameters can be estimated after a field and CRTM BTC comparison; this enables us to understand the aquifer’s biodegradation potential (for remedial design purposes).