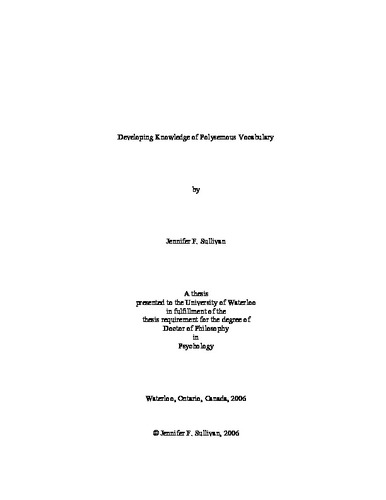 This study investigated the development of knowledge of vocabulary including multiple meanings of words during the school years. Twenty children from each of Grades 2, 5, 8, and 11 were tested for their knowledge of all the meanings of a large random sample of words from an unabridged dictionary (Webster's Third, 1981). Approximately 47% of the words had more than one meaning. Total average estimated vocabulary increased from 17,970 words in Grade 2 to 83,871 words in Grade 11. The estimated number of known derived words increased at the greatest rate throughout the school years. There was evidence that participants may have used morphological problem solving to figure out at least one meaning for 45% of their total vocabulary. Not only did the number of words known increase dramatically through the school years but the total average estimated number of different word meanings known increased also from 28,797 word meanings in Grade 2 to 185,990 word meanings in Grade 11. Three types of meanings were identified according to their relation to their principal meaning (known by the most children): homonyms (share no semantic relationship); conversions (different grammatical part of speech); and metaphorical extensions (share some other semantic relationship). When children demonstrated knowledge of more than one meaning, they were asked to attempt to explain the relation between those two meanings. Even the youngest children in Grade 2 knew a large number of multiple meanings but the ability to express knowledge of a relation between those meanings was uncommon until the later school years. This developing ability can be explained in part by the children’s increasing metalinguistic awareness and general linguistic expressiveness but also by an increasing ability to understand and express metaphorical similarities between lexical concepts, which are common to the metaphorically extended meanings.