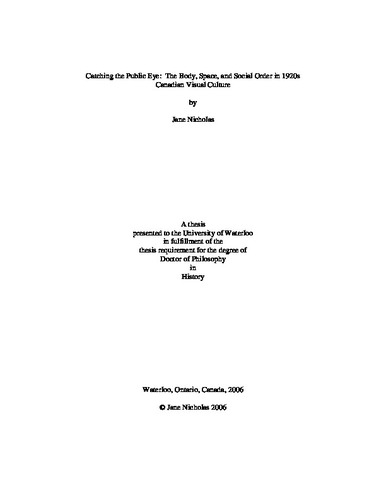 In the cultural upheaval of the 1920s, Canadians became particularly invested in looking at and debating women’s images in public. This dissertation looks at how English-Canadians debated, accepted, and challenged modernity through public images of women. In analysing the debates over cultural rituals of looking it seeks to show how the discussions about images reveal the power of vision in ordering and understanding modernity as well as social and cultural changes. Through five case studies on the flapper, the Diamond Jubilee of Confederation, two beauty contests, an art exhibition including nudes, and the relationship between film and automobiles this study reveals how important images of the body were to the cultural developments and debates on the post-World War One modern world. By the 1920s urban visual culture was dominated by various images of women and an analysis of those images and the debates around them reveal underlying tensions related to gender, class, age, social order, and race. Anxieties over changes in these areas were absorbed into the broader concerns over the pleasures and perils associated with being modern. This dissertation looks at Canadian visual culture in terms of what it can reveal about modernity and the problems, perils, and pleasures associated with it.