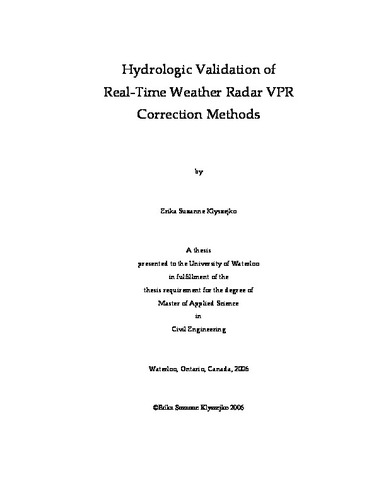 Weather radar has long been recognized as a potentially powerful tool for hydrological modelling. A single radar station is able to provide detailed precipitation information over entire watersheds. The operational use of radar in water resources applications, however, has been limited. Interpretation of raw radar data requires several rigorous analytical steps and a solid understanding of the technology. In general, hydrologists’ lack of meteorological background and the persistence of systematic errors within the data, has led to a common mistrust of radar-estimated precipitation values. As part of the Enhanced Nowcasting of Extreme Weather project, researchers at McGill University’s J.S. Marshall Radar Observatory in Montreal have been working to improve real-time quantitative precipitation estimates (QPEs). The aim is to create real-time radar precipitation products for the water resource community that are reliable and properly validated. The validation of QPEs is traditionally based on how well observed measurements agree with data from a precipitation gauge network. Comparisons between radar and precipitation gauge quantities, however, can be misleading. Data from a precipitation gauge network represents a series of single-point observations taken near ground surface. Radar, however, estimates the average rate of precipitation over a given area (i.e. a 1-km grid cell) based on the intensity of reflected microwaves at altitudes exceeding 1 km. Additionally, both measurement techniques are susceptible to a number of sources of error that further confound efforts to compare the two. One of the greatest challenges facing radar meteorologists is the variation in the vertical profile of reflectivity (VPR). A radar unit creates a volumetric scan of the atmosphere by emitting microwave beams at several elevation angles. As a beam travels away from the radar, its distance from ground surface increases. Different precipitation types are sampled at a number of heights (i.e. snow above the 0º C elevation and rain below it) that vary with range. The difficulty lies in estimating the intensity of precipitation at the Earth’s surface, based on measurements taken aloft. Scientists at McGill University have incorporated VPR correction techniques into algorithms used to automatically convert raw radar data into quantitative hydrological products. This thesis evaluates three real-time radar precipitation products from McGill University’s J.S. Marshall Radar Observatory in the context of hydrological modelling. The C0 radar product consists of radar precipitation estimates that are filtered for erroneous data, such as ground clutter and anomalous precipitation. The C2 and C3 radar products use different VPR correction techniques to improve upon the C0 product. The WATFLOOD hydrological model is used to assess the ability of each radar product to estimate precipitation over several watersheds within the McGill radar domain. It is proposed that using a watershed as sample area can reduce the error associated with sampling differences between radar and precipitation gauges and allow for the evaluation of a precipitation product over space and time. The WATFLOOD model is run continuously over a four-year period, using each radar product as precipitation input. Streamflow hydrographs are generated for 39 gauging stations within the radar domain, which includes parts of eastern Ontario, south-western Quebec and northern New York and Vermont, and compared to observed measurements. Streamflows are also modelled using distributed precipitation gauge data from 44 meteorological stations concentrated around the Montreal region. Analysis of select streamflow events reveals that despite the non-ideal placement of precipitation gauges throughout the study area, distributed precipitation gauge data are able to reproduce hydrological events with greater accuracy and consistency than any of the provided radar products. Precipitation estimates within the McGill radar domain are found to only be useful in areas within the Doppler range (120-km) where the radar beam is unobstructed by physiographic or man-made features. Among radar products, the C2 VPR-corrected product performed best during the greatest number of the flood events throughout the study area.