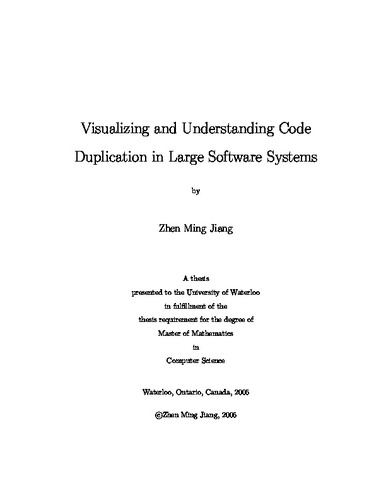 Code duplication, or code cloning, is a common phenomena in the development of large software systems. Developers have a love-hate relationship with cloning. On one hand, cloning speeds up the development process. On the other hand, clone management is a challenging task as software evolves. Cloning has commonly been considered as undesirable for software maintenance and several research efforts have been devoted to automatically detect clones and eliminate clones aggressively. However, there is little empirical work done to analyze the consequences of cloning with respect to the software quality. Recent studies show that cloning is not necessarily undesirable. Cloning can used to minimize risks and there are cases where cloning is used as a design technique. In this thesis, three visualization techniques are proposed to aid researchers in analyzing cloning in studying large software systems. All of the visualizations abstract and display cloning information at the subsystem level but with different emphases. At the subsystem level, clones can be classified as external clones and internal clones. External clones refer to code duplicates that reside in the same subsystem, whereas external clones are clones that are spread across different subsystems. Software architecture quality attributes such as cohesion and coupling are introduced to contribute to the study of cloning at the architecture level. The Clone Cohesion and Coupling (CCC) Graph and the Clone System Hierarchy (CSH) Graph display the cloning information for one single release. In particular, the CCC Graph highlights the amount of internal and external cloning for each subsystems; whereas the CSH Graph focuses more on the details of the spread of cloning. Finally, the Clone System Evolution (CSE) Graph shows the evolution of cloning over a period of time.